Sometimes, we're compelled to take the plunge into the world of absolute silliness. Today's featured episode of lunacy is inspired by a newswire photo of U.S. Secretary of State Hillary Clinton, whose image was captured through a Reuters photographer's video viewfinder. Here's the photo and caption as they appeared on Yahoo! News on Tuesday, 28 September 2010: 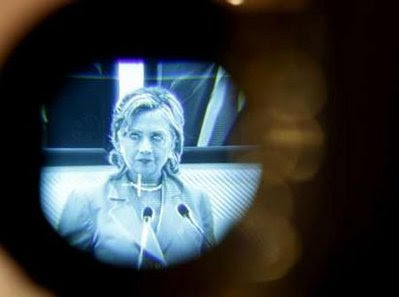 U.S. Secretary of State Hillary Clinton is pictured through a video viewfinder as she speaks during a news conference in Amman September 16, 2010.
REUTERS/Ali Jarekji (JORDAN)

Now, here's the Internet Movie Database's description of the the storyline for the great John Carpenter classic, They Live:

Nada, a down-on-his-luck construction worker, discovers a pair of special sunglasses. Wearing them, he is able to see the world as it really is: people being bombarded by media and government with messages like "Stay Asleep", "No Imagination", "Submit to Authority". Even scarier is that he is able to see that some usually normal-looking people are in fact ugly aliens in charge of the massive campaign to keep humans subdued.

Is it really any wonder then that the United Nations would appear to be currently seeking to appoint a "space ambassador" for the purpose of acting "as the first point of contact for aliens trying to communicate with Earth.":

Mazlan Othman, a Malaysian astrophysicist, is set to be tasked with co-ordinating humanity's response if and when extraterrestrials make contact.

Aliens who landed on earth and asked: “Take me to your leader” would be directed to Mrs Othman.

She will set out the details of her proposed new role at a Royal Society conference in Buckinghamshire next week.

The 58-year-old is expected to tell delegates that the proposal has been prompted by the recent discovery of hundreds of planets orbiting other starts, which is thought to make the discovery of extraterrestrial life more probable than ever before.

Yet before you think that the folks at Unoosa have a screw loosa, a UK-based expert in space law says Mrs Othman is the ideal candidate for the position:

Professor Richard Crowther, an expert in space law at the UK space agency who leads delegations to the UN, said: "Othman is absolutely the nearest thing we have to a 'take me to your leader' person".

The plan to make Unoosa the co-ordinating body for dealing with alien encounters will be debated by UN scientific advisory committees and should eventually reach the body's general assembly.

Opinion is divided about how future extraterrestrial visitors should be greeted. Under the Outer Space Treaty on 1967, which Unoosa oversees, UN members agreed to protect Earth against contamination by alien species by "sterilising" them.

Mrs Othman is understood to support a more tolerant approach.

That more tolerant approach would seem to go against the "kick their alien asses before they kick ours" approach advocated by physicist Stephen Hawking, who worries:

"I imagine they might exist in massive ships, having used up all the resources from their home planet. The outcome for us would be much as when Christopher Columbus first landed in America, which didn't turn out very well for the Native Americans."

Which brings us back to John Carpenter's classic exploration of human-alien contact, They Live, where we find perhaps the ideal model for such a UN space ambassador in the character portrayed by Rowdy Roddy Piper:

Highly recommended. And who knew it was really a documentary about our own time?!