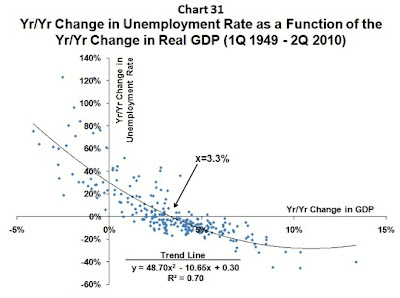 We realized that we might be able to answer questions like these after reading John Mauldin's weekly column The Morality of Chinese Growth, which featured a chart created by Gary Shilling showing the year over year percentage change in the percentage unemployment rate as recorded by the Census Bureau's/BLS' Current Population Survey against the year-over-year percentage change in real GDP, spanning quarterly data for both from the first quarter of 1949 through the second quarter of 2010.

The only thing that's a problem is the trend line equation, which seems to fit the data, but which really doesn't make economic sense because it's a quadratic equation. That's a problem because if we were to extend the curve to the right, we would see it begin to rise, before crossing back to indicate that we should expect the unemployment rate to rise, even if the economy were booming. 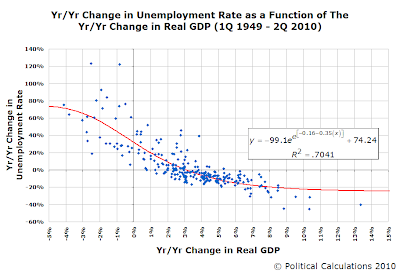 That just doesn't make any sense! So, we went out and got the original source data and generated a new trend line for it using ZunZun's 2-D function finding tool. Here's the option we selected, based upon its combination of mathematical simplicity (the variable x only appears once in the formula produced through ZunZun's regression analysis) and accuracy (the root mean square error of the data with respect to the curve is fairly low.)

Here, we find that instead of a parabola, the resulting trend line resembles a backwards S as it steers though the middle of all the data points. Better, instead of seeing the unemployment rate begin to rise with hugely positive rates of economic growth, it instead suggests that unemployment rates would continue to fall, which is what common sense tells us we should expect.

And where we have a relationship like this, we can make a tool that you can use to run your own numbers! What's more, we've created a field just for the year-ago quarter's average unemployment rate so you can translate the equation's results into an actual unemployment rate!