How much does the federal government subsidize the cost of college in the United States?

That's the subject of today's chart, where we've taken historical data from the White House's proposed budget for Fiscal Year 2011 and plotted it over time. The chart below shows both nominal and inflation-adjusted figures for all federal outlays for higher education since 1962, with projected values through 2014. 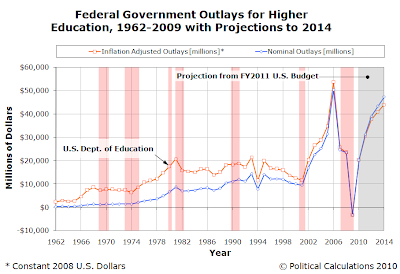 Federal spending for higher education largely consists of direct grants for students and subsidies for guaranteeing student loans, both of which have generally increased over time.

Here, we see that inflation-adjusted federal spending for higher education was flat from 1962 through 1965, but began rising sharply in 1966 through 1969. This coincides with the Higher Education Act of 1965, which greatly increased the role of the federal government in supporting higher education.

We next see that federal spending went flat-to-mildly negative in the years from 1969 through 1974, before increasing rapidly again in the years from 1975 through 1981. This period coincides with the full funding of Pell Grants in 1975, which greatly increased the number of poor students who could now attend college since the grants were initially sufficient to cover 80% of the cost of attending a four-year institution, including tuition, room, board, books and other expenses.

The years from 1982 through 2001 largely saw inflation-adjusted spending for higher education either be flat or fall slightly. That changed dramatically in 2002 as federal spending skyrocketed in 2002, with massive increases in both Pell Grants and subsidy support for student loan programs. This total of this spending peaked in 2006 ahead of the 2007 recession, with the bulk of the spending increase representing student loan subsidies.

The light-red shaded regions on the chart coincide with periods of recession in the United States. Here, we often see federal spending for higher education dip, largely as a result of falling interest rates during these times. The federal government can benefit from lower higher education costs during recessions because the revenue it receives from the loans it has already issued becomes greater than the costs of supporting its subsidized student loan programs.

2009 marks an anomaly however since there was also a one-time accounting adjustment for all student loans issued since 1992, which made it appear that the federal government more than offset its spending for higher education during that year. These adjustments helped conceal the full magnitude of the federal government's all-time record budget deficit in that year, which perhaps helps to explain the timing of these adjustments. 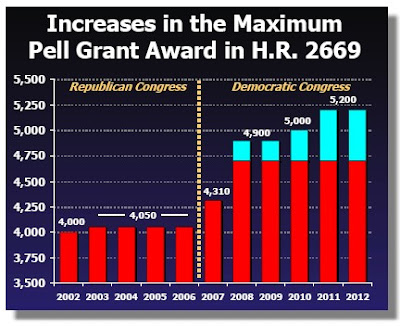 Looking into the future, we see that federal support for higher education is projected to climb back to the very elevated levels established during the early 2000s, as Congress has acted to increase the size of Pell Grants awards as well has to take over the private student loan industry.

As a final comment, we'll simply note that since student loan debts may not be discharged through bankruptcy, the federal government's takeover action could well be interpreted as perhaps the final step in transforming all student loan payments into outright taxes on the most highly educated portion of the U.S. population.