We recently took a trip to Home Depot, where we saw something that really took us by surprise: a 60-watt light bulb that costs just under 40 dollars!

So we built a tool to find out.

Here, we've entered our electric utility's average billing rate of 9 cents per kilowatt-hour (kWh) and 8,760 hours as our projected hours of expected use, which is consistent with having the light continuously on for an entire 365 day long year. (You're welcome to substitute the values that would apply to your scenario!)

We next entered the relevant data for each lighting technology: each light's technology type, its listed power consumption rate, the manufacturer's rated lifetime and also the unit price for one light bulb (which we entered as a fraction for our $1.27 package of 4 standard incandescent bulbs.)

Running these default values, we find that Philips' incandescent bulbs just barely edge out Philips' LED bulb, saving only one cent over that year's worth of continuous use.

If we extend the period of expected usage out to Philips' rated lifetime for the LED bulb of 25,000 hours however, we find that the LED's savings over standard incandescent bulbs turns positive, saving $49.83 over the cost of buying and replacing the much shorter-lived and less energy efficient incandescent bulbs.

So yes, it actually makes economic sense to replace a standard 60-watt incandescent bulb manufactured by Philips with their 60-watt replacement LED bulb! From a style aspect however, we would suggest that they might find their greatest use in lighting fixtures where you don't directly see the bulb when it's turned off. While we appreciate the technological solutions behind its seemingly steampunk-inspired kind of design, we do recognize it may not be for those who prefer the aesthetics of standard incandescent bulbs!

How Does That Compare to Compact Fluorescent Lights?

Once again, we returned to the light section at Home Depot to seek out another Philips product, so that we can consider different products made by the same manufacturer and obtainable from the same source, but this time, a compact fluorescent lamp (CFL): the Energy-Saver 14-Watt Natural Light Twister CFL, which costs $5.47 per unit, consumes 14 watts of power and is rated to last 10,000 hours.

We then adapted our tool to consider the finding by utility giant Pacific Gas and Electric (PG&E) that CFLs typically only last two-thirds as long as the lifespan for which they're rated. At present, it appears that LEDs are capable of lasting as long as their lifespan ratings, but never-the-less, if not, Philips offers a minimum 3-year warranty for their LED 60-watt incandescent replacement product, which we note would suggest that they're really capable of at least 26,280 hours of continuous use.

Running those numbers for a direct comparison between Philips CFL and LED products, we found that CFLs would appear to have a clear economic advantage over the LED technology, saving $27.85 over a one-year long period (8,760 hours), which drops to $14.72 over the full-rated lifespan of Philips 60-watt equivalent LED bulb. 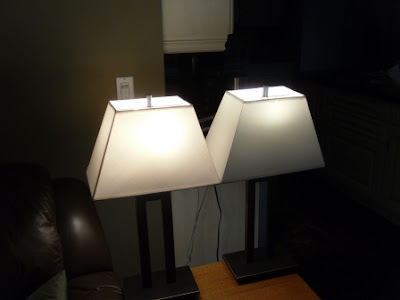 But we must also recognize that there is a big difference between these lights - specifically, how much light each produces.

Here, Philips' CFL produces just 650 lumens, which compares to 800 lumens pumped out by Philips LED bulb. Or to put it in non-technical terms, it's about 20% less bright, which you can see in the image to the right (the LED is on the left-hand side, while the CFL is on the right.) By contrast, Philips' standard incandescent bulbs produce 860 lumens, which means that the CFL only puts out 75% of the amount of light in comparison to that, while the LED is within 7% of producing the same physical amount of light.

Beyond the lesser amount of light, CFLs typically grow dimmer over time, take a noticeable amount of time to "warm up" to their full light output, and work less well in cold environments. Another factor to consider is that CFLs are much worse for the environment, because they contain mercury, which requires special disposal procedures that must be followed whenever a CFL is replaced or is broken - the U.S. Environmental Protection Agency's instructions for cleaning up or disposing of CFLs are two pages long.

Experience has taught us to not be fans of CFLs, whose use is just not as brainy as they're often made out to be. When we might switch from incandescent light technology, we would recommend moving to LED lighting technology, especially as their unit prices fall over time.

And hopefully, the producers of LED bulbs are already hard at work at making more classically-inspired designs! As it stands, it would appear that Philips is on track to win the U.S. Department of Energy's L-Prize, which only considers technical performance.

Buildaroo offers Yaakov Albietz' review of Philips EnduraLED 60-watt replacement bulb and Daily Home Renovation Tips did a side-by-side comparison of the light-emitting performance of Philips' CFL and LED products. Marc Gunther notes that Philips is currently offering a $10 mail-in cash rebate to entice new buyers! (We'll let you run the numbers associated with getting that rebate on your own, but let's just say that if you're still willing to get by on 150 lumens worth of less light from a CFL to get the savings over the LED product, your money situation is a lot tighter than you likely want to admit.)

Perhaps the definitive guide to the issues associated with CFLs was put together by Paul Wheaton of permaculture.

Also, David Tufte considers the concept of operating leverage as it applies in choosing a specific technology like CFLs over incandescent or LEDs, where the technology chosen is later found to not live up to its promise.