There is a lot to not like about the Patient Protection and Affordable Care Act (PPACA, a.k.a. "ObamaCare"), but now that the federal government is spending money allocated by the health care reform law, there's perhaps even more to not like about it!

We're referring to more than $1.789 billion dollars of corporate welfare that was authorized by the law for the purpose of subsidizing the health care expenses of the early retirees whose benefits are paid by corporations, unions and state or local government agencies, who would otherwise have had to continue paying these costs out of their own pockets—just as they did before the law's passage.

Overall, some 1,315 of these entities received cash from the federal government in the first year since the PPACA became law, totaling $1,789,449,634 in all. The pie chart below shows how much the top ten recipients of this new kind of taxpayer-funded corporate welfare received of the total, along with the combined take of the remaining 1,305 recipients. 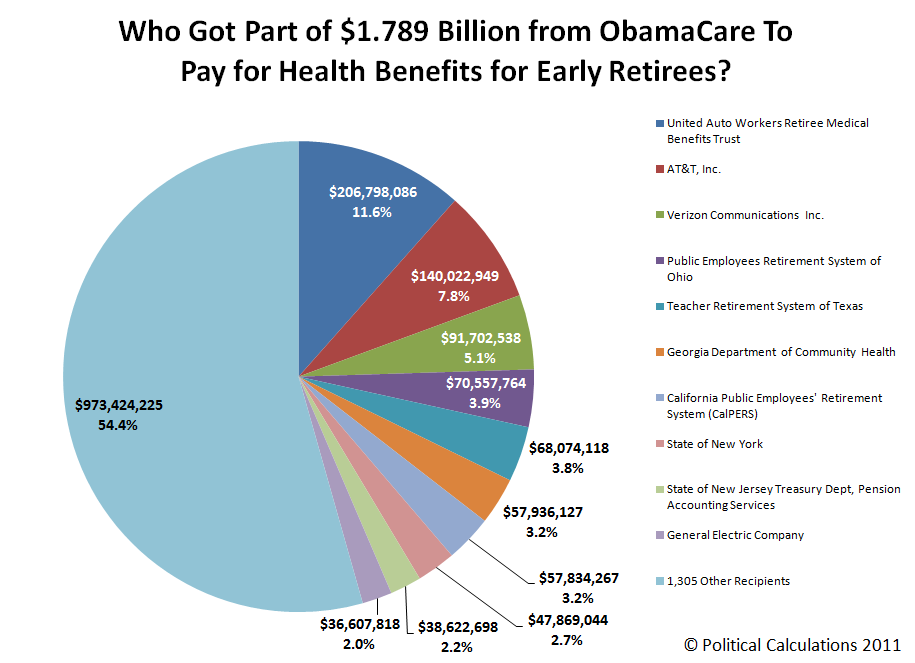 Combined, the Top Ten recipients of this corporate welfare took 45.6% of the total $1,789,449,634 taxpayer dollars that were doled out, with the United Auto Workers taking the largest chunk by a wide margin, with $206,798,086, or 11.6% of all the taxpayer money that was allocated for the purpose.

Surprisingly, two telecommunication giants AT&T and Verizon took the second and third positions, with 7.8% and 5.1% of the total take respectively.

After that, three state agencies occupied the fourth, fifth and sixth largest positions—the Teacher Retirement System of Texas, the Georgia Department of Community Health and the California Public Employees' Retirement System (CalPERS), the latter frequently in the news recently for corruption scandals and its massively underfunded pension liabilities.

Corporate basket case General Electric, which has come to rely greatly upon government mandates, special protections, subsidies and bailouts for its revenue, rounds out the Top Ten with an even 2.0% of the total handout.

The remaining 1,305 entities collected the remaining 54.4% of the money paid out by the government to pay for the health benefits of people who chose to retire from their professions early, with the Minnesota Cement Masons taking the least of all the recipients, at 60 dollars.

We know what you're thinking, and no, we really can't make this stuff up!