Previously on Political Calculations, we discovered that we can use international trade data to diagnose the relative health of national economies. 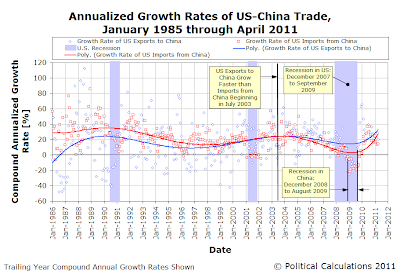 The way this works is to consider that a growing economy will demand more goods - a portion of which will be imported from outside the country. By measuring the growth rate of both imports and exports between two nations, we can determine how relatively "healthy" the economies of both nations are.

Today, nearly a year later, we find that both nations would appear to have growing economies, but that after the Chinese economy surge in the last quarter of 2009, and the U.S. economy surging in the first half of 2010, both the U.S. and Chinese economies are growing much more slowly. 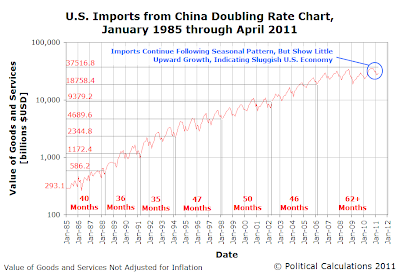 A special concern now is that the rate of growth of U.S. imports from China is slowing, which indicates that economic growth in the U.S. is comparatively weaker than it is in China.

We confirm that outlook in examining our doubling rate chart showing the level of U.S. imports from China from January 1985 through April 2011.

Here, we see that it has been more than five years since the U.S. doubled the amount that it imports from China, which is significantly more than the 3 to 4 years that these imports doubled in the twenty years from 1985 through 2005. 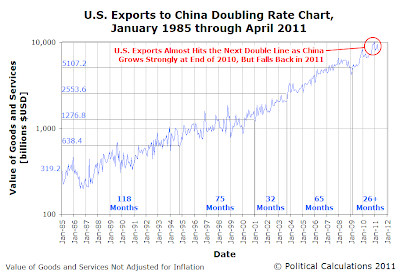 We suspect that this extremely rapid rate of growth for U.S. exports to China is being largely driven by the China's massive economic bubble, so we would anticipate that U.S. exports may drop considerably once that bubble enters into its deflation phase.

Which like all economic bubbles, will happen. It's only a matter of when and how.