By now, you've likely heard much of the commentary of how bad the June 2011 Employment Situation report was. Words like horrible, stunningly bad and awful have been used to describe it.

And yet, it was actually worse than that, with one surprising exception. 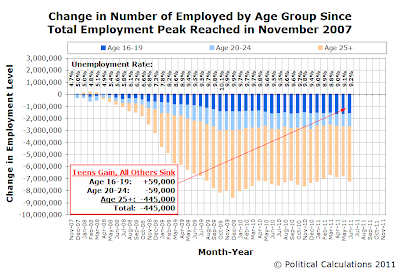 The surprising exception is the teen employment level, as June 2011 saw 59,000 more individuals between the ages of 16 and 19 enter the U.S. work force. That positive net change quickly evaporated however, as 59,000 fewer young adults between the ages of 20 and 24 were counted as being employed during the month. And then, things took a dramatic turn for the worse for individuals Age 25 and older, as the number of employed Americans in this age category saw their numbers in the workforce plunge by 445,000.

For those Age 25 and older, we have to go back to December 2009's month-to-month job loss of 595,000 to find a worse figure for this age category. The same holds true for all individuals Age 16 or older.

Compared to when the total employment level in the United States peaked in November 2007 just ahead of the recession, some 7,250,000 fewer Americans are being counted as being part of the U.S. workforce today.