How many pages does it take to explain the basics of the U.S. Medicare program?

If you answered "a lot more than it used to", you're right! Each year, legal publisher CCH puts out a book simply titled Medicare Explained, which they describe as follows:

A book for Medicare beneficiaries and others who need a relatively thorough explanation of the Medicare program with particular emphasis on services covered in institutional settings and services provided by physicians and suppliers. A detailed explanation is provided regarding eligibility, enrollment, benefits, exclusions and payment rules for Medicare Parts A, B, C and D. This book also explains the process for submitting beneficiary claims and filing an appeal.

As we saw with CCH's Standard Federal Tax Reporter and the U.S. tax code, the growth of the complexity of the laws and regulations affecting Medicare can be measured by the number of pages this particular book requires each year. Our chart below shows how that's changed for each year in which an edition has been published since 1996: 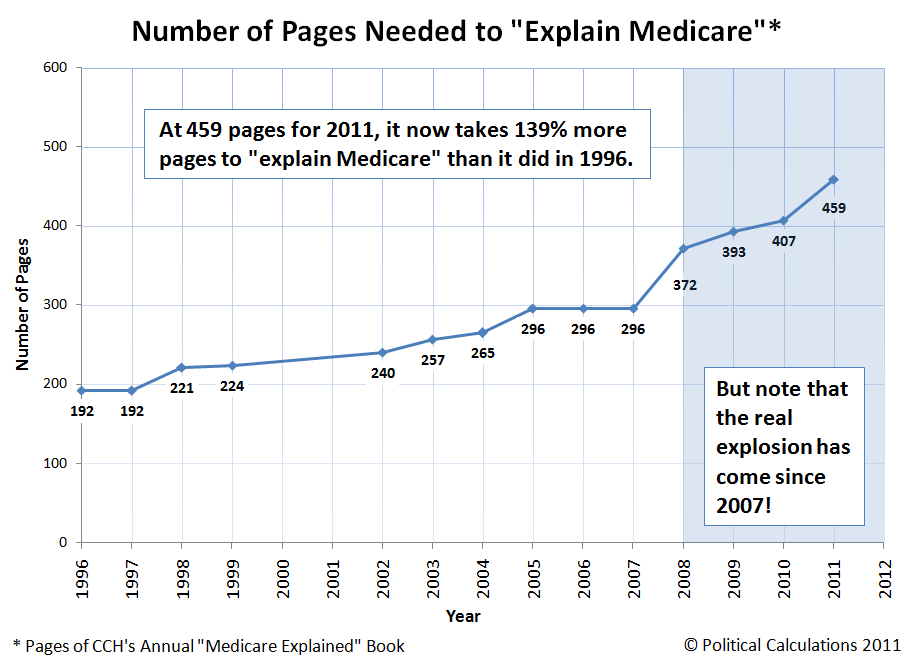 We see that over time, more and more pages have been required to "explain Medicare", although the real explosion in the government program appears to have taken place since 2007.

As it happens, that corresponds to the passage of the Medicare, Medicaid and SCHIP Extension Act of 2007, which passed into law on 29 December 2007.

It may seem strange that this act, whose main purpose was to extend existing health insurance coverage benefits for the existing Medicare, Medicaid and SCHIP programs, in addition to postponing payment cuts to physicians, would have such an effect.

However, the law, co-sponsored by Senators Max Baucus (D) of Montana and Charles Grassley (R) of Iowa, also contained a massive increase in regulatory reporting requirements for insurance providers. Commercial property and casualty insurance provider CNA explains in its summary of the Medicare, Medicaid and SCHIP Extension Act as it relates to the Medicare Second Payer Act from 1980:

What is the Medicare Secondary Payer Act?

In 1980, the Medicare Secondary Payer Act (the MSP) was enacted to amend the Social Security Act, representing an effort to reduce federal health care costs. MSP prohibits Medicare from reimbursing for medical benefits where "payment has been made or can reasonably be expected to be made" under a workers' compensation law, or other private insurance plans. As a result, Medicare was no longer a primary payer for a Medicare beneficiary's medical costs.

Insurers providing these products must report claim information involving a Medicare beneficiary claimant (a) where an ongoing responsibility for medical payments exists as of July 1, 2009, and (b) where the settlement, judgment or award date is on or after January 1, 2010. Failure to comply with these requirements can result in civil penalties of $1,000 per day, per claimant.

These new requirements reinforce the goals of the MSP statute, supporting Medicare’s ability to:

Under Section 111, insurers must (1) determine whether an injured claimant is a Medicare beneficiary; and if so, (2) submit additional information for that claimant via a quarterly secure electronic data interface.

The Centers for Medicare & Medicaid Services (CMS) is the federal agency in charge of the administration of Section 111.

Each quarter, it will review and validate all data transmissions received from insurers. These transmissions are being referred to variously as 'Claim Input Files,' 'Mandatory Insurer Reports,' or 'MIRs.' The CMS will also issue and collect all fines.

So what does all that mean for U.S. businesses? CNA continues:

Complying with Section 111 and CMS guidelines may require your company to introduce new policies, change internal business practices, or enhance technical functionality within your data management systems. In order to remain compliant, your company should focus on the quality of the claimant data you collect, analyze, and submit electronically to the CMS — and be sure that all electronic transmissions occur on or before the dates mandated.

It turns out that combination of new regulatory requirements and potential penalties for failing to comply with the letter of the regulations are exactly the sort of thing that can make a book called "Medicare Explained" increase in size by 25%, or 76 pages, in just one year!

By contrast, the portion of the Patient Protection and Affordable Care Act (aka "Obamacare") that goes into effect in 2011 only added 12.8% more pages, or 52 pages to CCH's Medicare Explained book. But then, the changes driven by ObamaCare will be adding to the size of the book for years to come!