Once upon a time, we developed a better method for detecting housing bubbles. Today, we're going back to the data mines to do some refinement and to see where things stand today!

Our first chart shows the relationship between median new house prices in the United States and median household income for the years from 1967 through 2010. 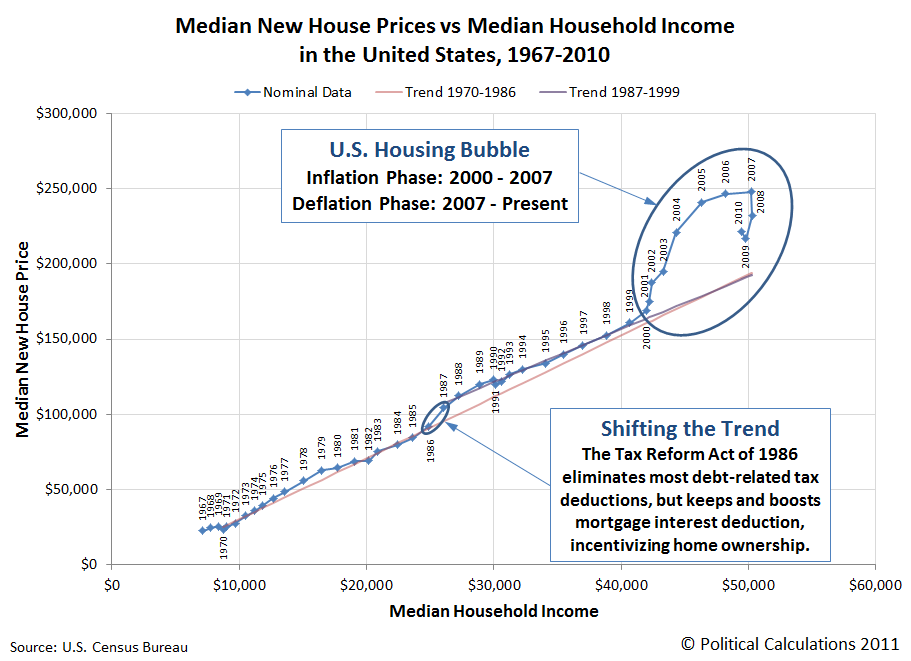 Here, we've revised our earlier look to better define the major trends evident in the data. Here, we see one major trend running from 1970 through 1986, then a second trend running from 1987 through 1999. After 1999, we see the housing bubble beginning its inflation phase as the relationship between median new house prices and median household income became decoupled, running through 2007. Since then, the U.S. housing bubble has been in its deflation phase, which appears to still be ongoing, as the relationship between the median prices of new houses and median household income remains decoupled.

One important thing to note is the shift in the trend that occurred after 1986. We believe this shift was triggered by the Tax Reform Act of 1986, which eliminated a number of debt-related tax deductions, but which left the long-standing mortgage interest deduction in place, even increasing the amount of the deduction.

The changes brought about by the Tax Reform Act of 1986 had two main effects. First, it incentivized home ownership by enhancing the tax benefits associated with owning property and having a mortgage. Second, in eliminating the favorable treatment of other debt interest, it made the home mortgage the primary channel by which people would choose to accumulate debt thanks to the interest on that debt being tax advantaged.

These changes however are not the cause of the U.S. housing bubble, as there is no correlation between the shift in trend and the beginning of the bubble in 2000. More interestingly though, we see that both trends would project nearly the same median new home price given the current level of the U.S. median household income.

Looking at the more recent trend that was defined in the period from 1987 through 1999, we can see that the relative affordability of a median new home in 2010 is still well elevated above where it would have been during that period. The following chart shows the percentage deviation between the 1987-1999 trend and actual median new home prices from 1987 through 2010, which gives a sense of how overpriced the median new home has been since 1999 thanks to the U.S. housing bubble: 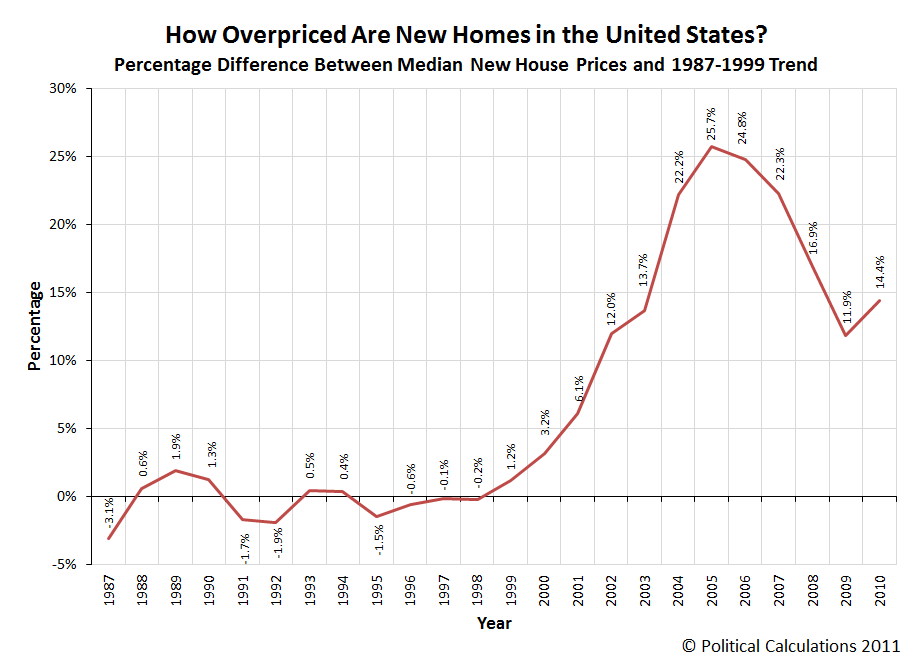 Here, we see that the relative affordability of the median new home with respect to where it typically was from 1987 through 1999 peaked in 2005, with a percentage deviation of 25.7%. Since then, the median price of a new home has fallen, bottoming in 2009 at a level 11.9% over where the linear trend that ran from 1987 through 1999 would place it, before bouncing back up to be 14.4% higher than the level of the projected trend in 2010.

What's interesting to us is that it appears that we stumbled directly into something that looks very much like the Case-Shiller house price index! 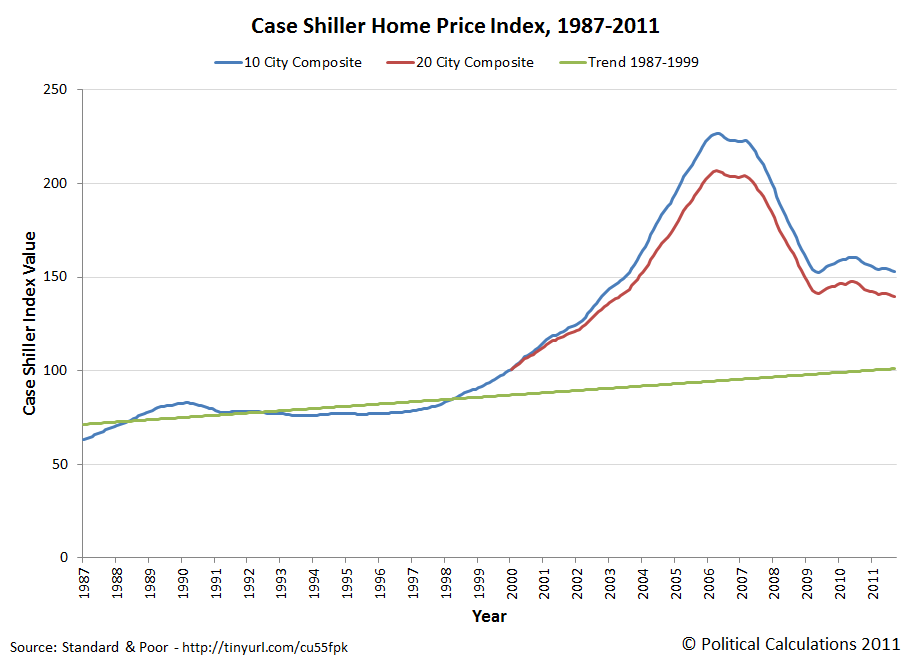 Here, looking at both the 10-city and 20-city composite indices, we find that our representation above closely follows the pattern traced out by the Case-Shiller 20-city composite data - at least with respect to the linear trend we created in the chart for the period from 1987 through 1999.

But unlike the Case-Shiller data, because our method correlates house prices with household income data, it will better communicate the relative affordability of homes in the U.S. over time!

Since the Case-Shiller data has been updated more recently than the Census data, it appears that house prices in the U.S. have resumed falling in 2011. And even though those falling prices are making homes more affordable today, they would have to fall by roughly another 12-14% before they would be in the same ballpark for affordability that they were in the years from 1987 through 1999.

Or as the projected trend works out to be from our first chart, the same level of affordability that they were for Americans in the years from 1970 through 1986 as well.