The big news on the jobs front is that the unemployment rate for December 2012 fell to its lowest rate since early 2009, reaching 8.5% following a massive revision in U.S. employment data covering the period from January 2007 through December 2011.

But even with that revised data, and the apparent surge in job growth for the month of December, both teens (Age 16-19) and young adults (Age 20-24) saw no gains for the final month of 2011 and, in fact, saw their numbers in the U.S. workforce decline. 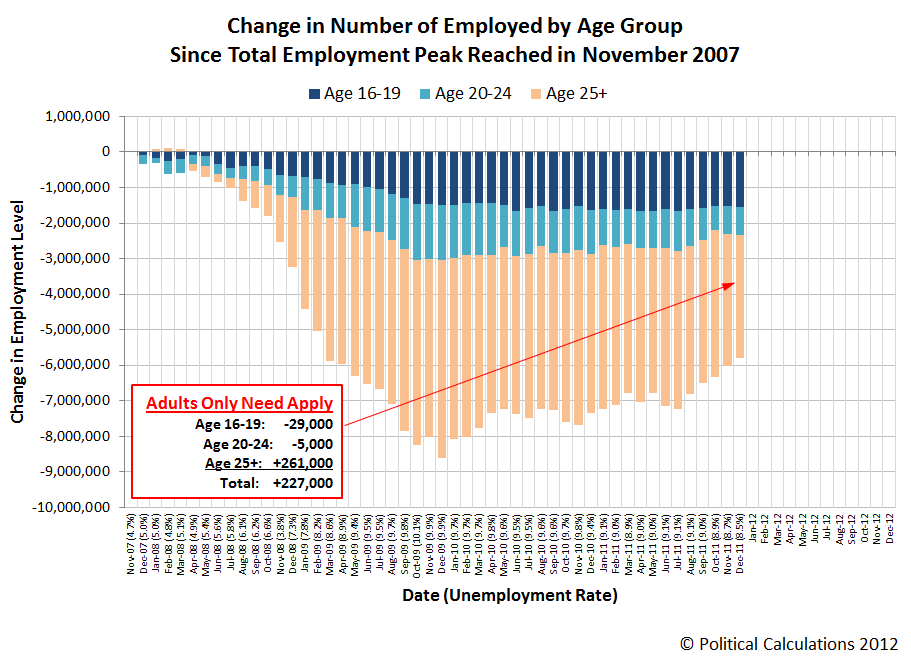 All of the net gain in the number of employed Americans was concentrated among individuals Age 25 or older in December 2011.

Worse, if we look at the total number of jobs lost by age group since total employment peaked in the United States in November 2007, we find that American teens have seen little-to-no improvement in their number of employed since December 2009 when, by all appearances from the revised jobs data, the maximum number of jobs lost in the U.S, economy occurred.

By comparison, both young adults (Age 20-24) and adults (Age 25 and older) have seen their numbers increase in the U.S. workforce during that time.

This lack of improvement in the employment situation for U.S. teenagers over the last two years very likely explains President Obama's new initiative to get corporations, non-profits and government agencies to hire 250,000 teens for summer jobs in 2012.

Because obviously, none of the President's previous pivots to jobs ever worked for helping American teens get work....