Because of that, celebrating St. Patrick's Day is about more than wearing green and drinking beer. It's also about drinking away the sorrows and memories that go with really bad engineering.

To that end, we're going to highlight three beer-drinking related inventions that really deserve to be forgotten on this St. Patrick's day. In fact, they appeared among InventorSpot's Luke McKinney's list of Ten Things You Don't Need on St. Patrick's Day, a list of things that might have seemed like they would be good inventions when their respective inventors were drinking, some heavily, but weren't for the reasons Luke identifies....

First up, the engineering disaster that is... "beer shorts": 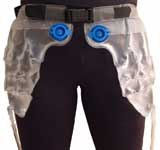 Straight from a college movie, a sneaky way to smuggle beer into guarded or expensive areas. The reason it works in movies is because you don't see the awkwardness of wearing them, or feel the terrible sensations of walking with loose sacks of liquid strapped to your nether regions. To say nothing of the shame of being caught in what look like floppy cyber-diapers . And if you can't see the problem in wearing large sacks of booze around your crotch in public, then you're likely too drunk to even read this right now.

We know what you're thinking: "What about the ladies? Surely there must be some other invention that required some really bad engineering to put together so women can also have an invention for secretly transporting beer on their persons! One that wouldn't make their hips look bigger, because apparently, that's not necessarily a good thing."

And you would would be right. Let's call that badly engineered invention: "The Beer Rack":

Hey there lady, do you wish you could simultaneously carry free beer and have bigger breasts? Then congratulations, you don't need to buy anything because you're a figment of a teenage boys imagination! Thrillist, however, are ready should you ever exist with the Winerack. They point out how smuggling bladders of booze on your chest makes your breasts look bigger. They don't say anything about dealing with mammaries that deflate and turn wrinkly over the course of the night - though you could view it as training for life.

Finally, another really badly considered beer containment and transportation device that sets the bar for really bad engineering ideas in action. Ladies and gentlemen, we give you the "Beer Belly":

Truly, we have advanced as a culture. My father had to drink his way to an unsightly beer belly the old-fashioned way. Now you can buy your own, and apply liters of sloshing alcohol to your gut directly! Featuring everything that's wrong with the Beer Bra without even pretending there's an upside. Bonus points for the male model in the picture. "Yes, I'm an alcoholic just like you! I mean, whenever I'm not spending five hours a day in the gym, I'm definitely in - er, pubs, right?"