With the BEA's release of the third and final (for now) GDP estimate for the fourth quarter of 2011, we can now project ahead and finalize our forecast of the size of the U.S. economy in the first quarter of 2012. Our accompanying chart shows what pure momentum mixed with some statistical analysis would project: 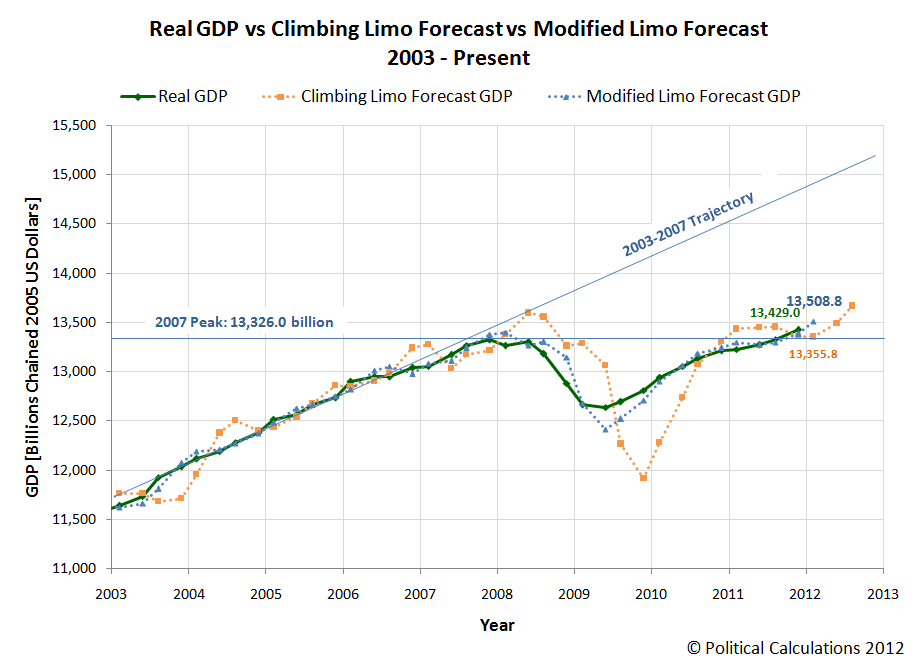 Our preferred "modified limo" forecasting technique anticipates that inflation-adjusted GDP for the first quarter of 2012 will be reported to be approximately $13,508.8 billion constant 2005 U.S. dollars when the BEA records its third estimate of this quarter's GDP at the end of June 2012. The BEA will provide its first estimate for this quarter at the end of April 2012, and its second estimate near the end of May 2012.

Using statistics, we can give the following probabilities for where 2012-Q1's level of inflation-adjusted GDP will be recorded. All values below are given in terms of constant 2005 U.S. dollars:

We've set the default values in our tool below for forecasting the midpoint of our projected GDP range using our "modified limo" method:

One thing to note about our methods is that even if they turn out to be off-target, any significant deviation in the level of GDP recorded by the BEA and our projections can be taken as in indication of a significant shift in the direction of growth for the U.S. economy. In the event of such deviations, our forecasting method will self-correct, as can been seen in the chart we've included in this post.

Looking further into the future, we continue to anticipate that the growth rate of the U.S. economy will remain positive but will also continue decelerating in the second quarter of 2012.