Let's get all the good news for jobs in the U.S. in March 2012 out of the way first, shall we? Here it is, in bullet point format:

That's pretty much all the good news in the March 2012 report. Let's look next at the household survey portion of the report to get a sense of the rest of the story, beginning with the breakdown of how the various age groups we regularly track are faring. 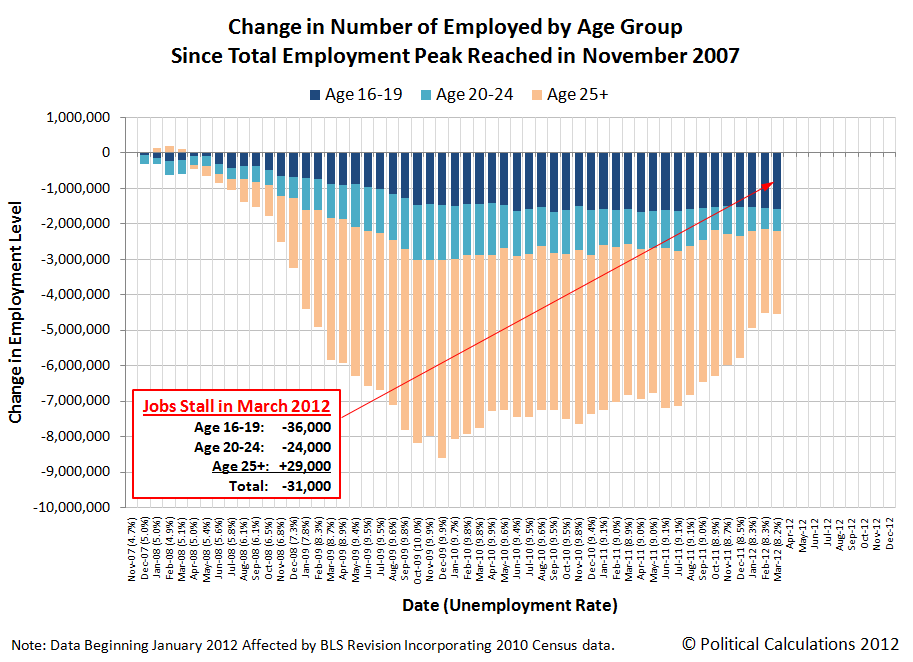 We see in our chart showing how the number of teens (Age 16-19), young adults (Age 20-24) and adults (Age 25 and older) in the U.S. workforce has changed since the total level of employment in the United States peaked in November 2007 just ahead of the most recent recession, that both the number of teens and young adults fell during March 2012, more than offsetting the gains of U.S. adults.

Meanwhile, the recent trend of job gains for young adults (Age 20-24) appears to have stalled and perhaps reversed. Prior to March 2012, U.S. young adults had been a major beneficiary of the job gains that have been recorded since September 2011.

The March 2012 jobs data would seem to confirm that the U.S. economy has indeed begun to decelerate after growing strongly, as we have been expecting. We would be seeing a very different picture for jobs in the U.S. if the economy were genuinely gaining steam across the board.

Which is perhaps why many observers, such as Reuters' Felix Salmon, were so unpleasantly surprised - the March 2012 jobs data is sharply contradicting the media's latest narrative!