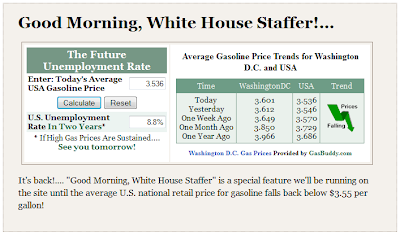 We appreciate your daily visits, as you continue your ongoing efforts to closely monitor the U.S. gasoline price situation. We have, after all, tailored our top-of-the-page "Good Morning, White House Staffer" feature specifically to assist you in your daily task.

But we're afraid that we'll soon be taking down our feature, as the average retail price of a gallon of unleaded gasoline in the United States has fallen below $3.55 per gallon. Given the potential for volatility in that average price, we'll keep it going until it firmly drops below $3.50 per gallon, as this will help ensure that we don't discontinue our feature too early, should there be any unexpected supply disruptions in the next several weeks that might boost it back over the $3.55 per gallon mark.

That's good news for you, in the short term sense, as we expect that U.S. employers will react positively to falling fuel and transportation prices, which if our previous observations hold, will mean that the pace of weekly layoffs in the United States will change for the better within 2-3 weeks of the national average gasoline price dropping below $3.50 per gallon, which we would measure by the number of seasonally-adjusted new unemployment insurance benefit claims filed each week.

If we're lucky in the short term, we'll see if the rate of layoffs that prompt new unemployment insurance claim filings shifts to a new, more positive trajectory if gasoline prices fall back below the $3.50 per gallon mark in the weeks ahead.

But then, we'll be unlucky in the longer term because that will mean that the world demand for oil will have dropped enough to make that possible, as much of the world appears headed for recession. That of course will have consequences for the U.S. economy.

In the meantime though, we continue to expect the U.S. economy will rebound a bit in the third and fourth quarters of 2012, after passing through the equivalent of a microrecession during the current second quarter. The story for 2013 will be very different, we're afraid....

That said, our previous advice to you to keep your résumé up to date still holds. We would also suggest that this summer will perhaps present the best opportunity you will have to sell your metropolitan Washington D.C. home before that real estate market changes.

And now you can't say that you weren't warned when it mattered most - when you still had time to do something about your situation!