How big of a problem do plastic shopping bags pose to the environment?

Since the elected supervisors of Los Angeles' City Council recently voted to ban plastic shopping bags at the city's retailers, largely in response to "clean-water" advocates, who argue that the bags "pollute the ocean and the city's waterways", we thought we'd get a sense of just how big that problem really is.

Our chart below presents the answer, which refers to data that those who support bans on plastic shopping bags frequently cite in advancing their agenda: 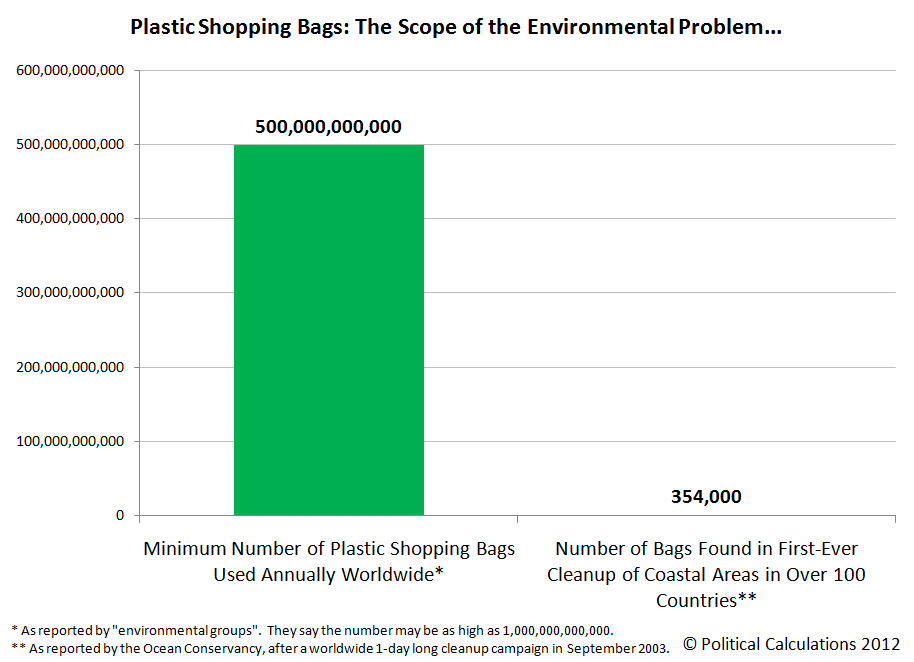 The values shown in the chart above were originally reported in 2004. There are a number of points to note about the results for the first-ever worldwide cleanup of the coastal areas of the United States and 100 other countries:

More fascinating to us however, we've discovered that so-called "green" advocates are incredibly fond of recycling the Ocean Conservancy's 354,000 bag cleanup figure from September 2003, citing it as being a valid figure that applies year, after year, after year. We're nearly at the decade anniversary and apparently, only 354,000 bags ever get cleaned up from the world's coastal areas each year!

Either that means the problem is not getting any worse despite a great deal of economic and population growth worldwide in the intervening years, which would have greatly increased the world's consumption of plastic shopping bags, or that these environmental activists just don't care enough about the environment to bother with picking up more than 354,000 mostly plastic bags from the world's coastal areas in any given year.

The alternative possibility is that a large number of environmental activists recycle the data because updating it would take actual effort on their part. Plus, there's the little matter of how foolish they might look if they ever fail to collect at least as many as their apparent annual quota of 354,000 bags!

If only these people cared more about the environment!...