We wish we had thought of this, but credit belongs to Business Insider's Joe Weisenthal (HT: Lorenzo), who has worked out how the price of beer correlates with the economic health of various European nations:

What basically happened over the past several years is: Prices of everything surged in the periphery of Europe, while staying incredibly stable in Germany. This has been a boon to Corporate Deutschland, as it is far more competitive—on a price basis—than all of its peers.

Now the peripheral countries are being asked to devalue and regain competitiveness, but it is a difficult if not impossible task. The problem is that when devaluing an economy the legacy debts remain, and so the sovereign debt of the country stays there, while all of the internal income goes down. And you get a crisis.

So naturally the first thing we did when checking out the new European pricing data is check out the price of beer.

And the chart is a doozy.

What we've done here is charted the price of beer in Greece (blue), Italy (orange), Spain (red), Ireland (green), and Germany (black). Now this is an index chart; essentially the beer component of the CPI. We've set the index to start at 100 in 1996.

The first thing you see is that Greek inflation is WAY above everyone else.

The next thing you see is that Germany has had very little beer inflation since 1996.

And Ireland (in Green) did once have a huge price bubble, but has now seen significant beer deflation. And not surprisingly, Ireland is seen as having made far and away more progress in its efforts at regaining health.

So really the beer chart says it all: Greece: a wreck. Germany: calm. Spain and Italy: in trouble, and Ireland making a comeback.

The entire European crisis explained by the price of beer. 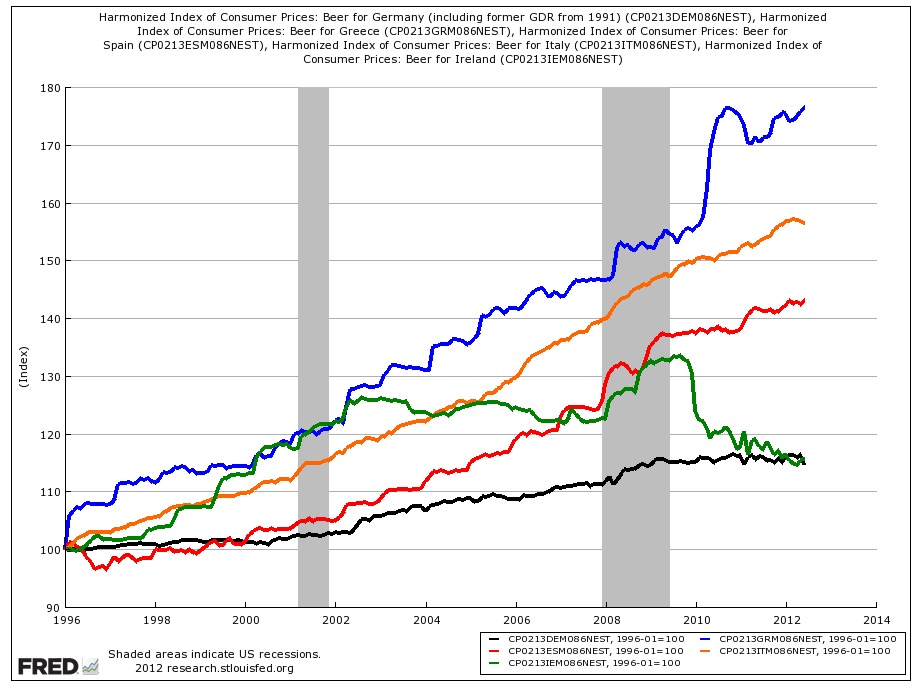