Unlike last month, there were no bright spots in the household survey portion of the July 2012 employment situation report. Unless, that is, you consider that teens, the most marginal of workers in the U.S., not only held onto the 140,000 jobs they gained in June 2012, they added 18,000 more to their total within the employed ranks of the U.S. work force in July 2012, bringing their overall numbers to 4,546,000, or 3.2% of the entire working population of the United States. 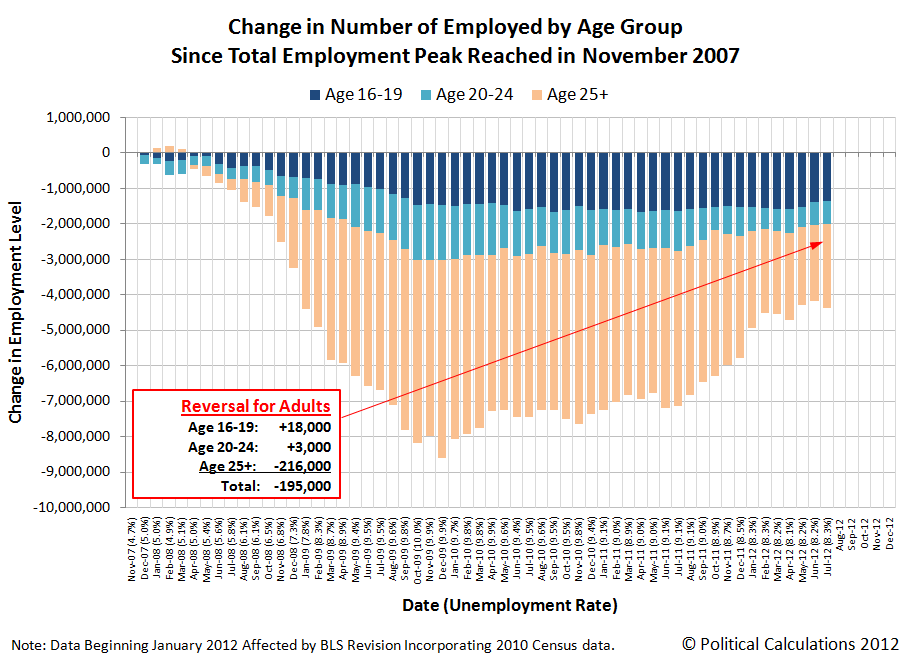 That's a strange result when you think about it, because it suggests that for some reason, U.S. employers are favoring relatively uneducated, unskilled and inexperienced teens over their more educated, skilled, experienced and older peers in the U.S. work force.

According to the White House's press release at the time, at least 90,000 of those jobs would be paying jobs.

Going by that measure, with the government's official statistics indicating that only 158,000 new jobs for teens were added during the months of June and July, President Obama's teen summer jobs program would appear to have fallen about 47% short of his stated goal of providing 300,000 new jobs for teens in the summer of 2012, despite having lined up commitments to hire U.S. teens from over 150 companies, organizations and government agencies, according to the U.S. Department of Labor web site for the program.

We believe that the combination of the lackluster performance of President Obama's teen summer jobs program and the falling number of working adults in the U.S. economy during the past month indicates that the U.S. economy is actually performing considerably worse than than the official employment situation report for July 2012 would seem to indicate. If not for the effect of the private sector partners hiring of teens as part of the President's 2012 summer jobs program, propping up the number of employed teens, we would likely have seen the official unemployment rate in the U.S. rise higher than the 8.3% that was recorded for July 2012.