Political Calculations
Unexpectedly Intriguing!
04 September 2012
Are Americans Better Off Than They Were Four Years Ago?

"Are Americans better off than they were four years ago?" The various responses that Democratic Party politicians offered to that question dominated the political news headlines this past Labor Day weekend, so we thought we'd take a stab at answering the question today.

If we go by the polls of the most important issues identified by Americans, we find job creation at the top of the list, so we'll use that as our measure in today's post. Here, we'll use the BLS' monthly survey of business establishments in the U.S. to count the number of non-farm payroll jobs in the U.S., which last peaked in January 2008 at the very beginning of the recession (the economy itself peaked in December 2007, which marks the official start of the recession.) 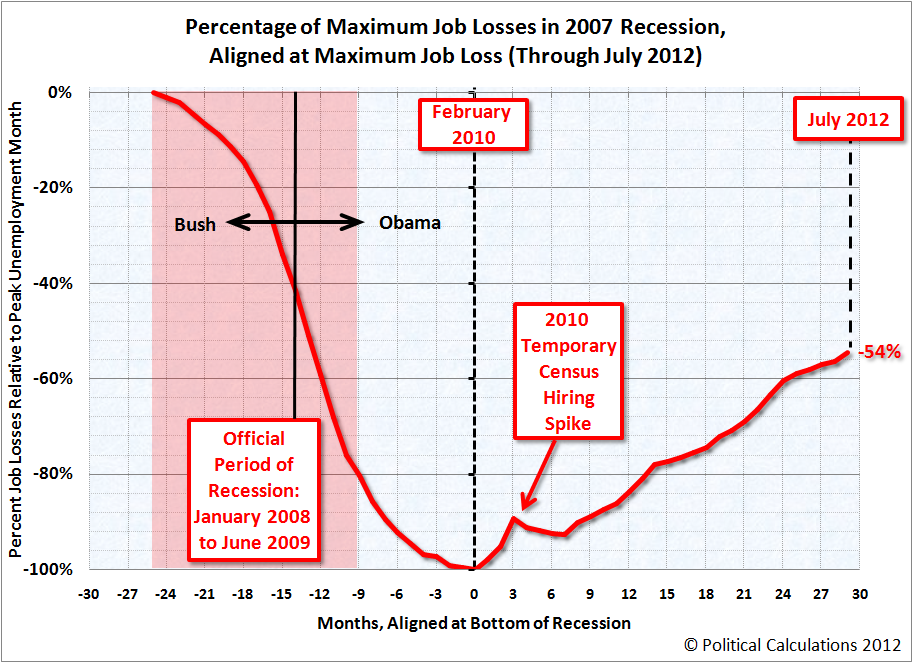 Through July 2012, the most recent month for which we have data at this writing, the U.S. economy has recovered just 46% of the non-farm payroll jobs lost since January 2008, as the percentage of the maximum number of payroll jobs lost stands at 54% of the recession's maximum job loss figure.

Since hitting bottom in February 2010, some 7 months after the recession officially ended in June 2009, we find that the rate of job creation during President Obama's administration has been extremely lackluster.

That point is brought home when we compare the recovery for the 2007 recession with all of the previous U.S. economic recession recoveries since the end of World War 2 in 1945. Our next chart compares the rate of post-recession job creation following the bottoms of these eleven recessions: 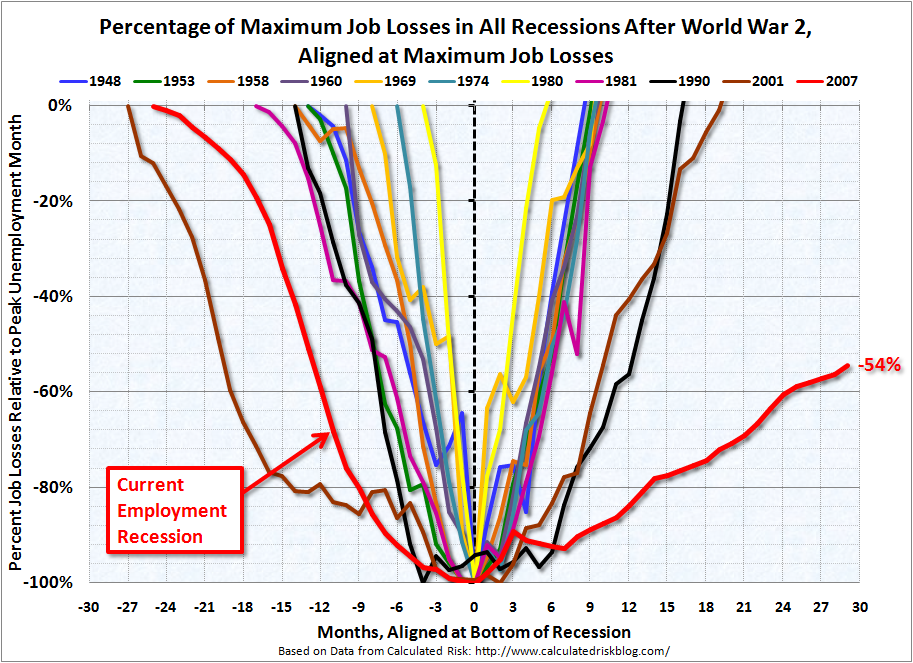 We find that the pace of job creation following the bottom of the 2007 recession, which has taken place entirely within President Obama's time in office, represents the worst pace of post-recession job creation for any modern era President on record.

By comparison, the second worst rate of post-recession bottom job creation belongs to the recovery from the 2001 recession under President Obama's predecessor in office, President George W. Bush. From the time the 2001 recession hit bottom during his tenure, it took 19 months for the economy to recover 100% of the non-farm payroll jobs that had been lost during that recession.

Today, almost 30 months after the 2007 recession hit bottom, more than half the payroll jobs lost during the recession have yet to be recovered. Using the starting point of January 2009, when just 40% of the non-farm payroll jobs that have been lost during the recession had been lost, we find that the jobs recovery that has taken place during President Barack Obama's tenure in office has still not yet recovered to that lower point of reference nearly four years later.

By those objective measures then, when it comes to job creation, the most important issue that Americans say matters today, Americans are not better off today than they were four years ago.