President Obama has been claiming while out on the campaign trail that he has created over five million jobs since being sworn into office in January 2009.

Today, we're going to adapt the chart we normally feature after each monthly employment situation report to see what the real numbers are, by age group!

Our chart below reveals what we found: 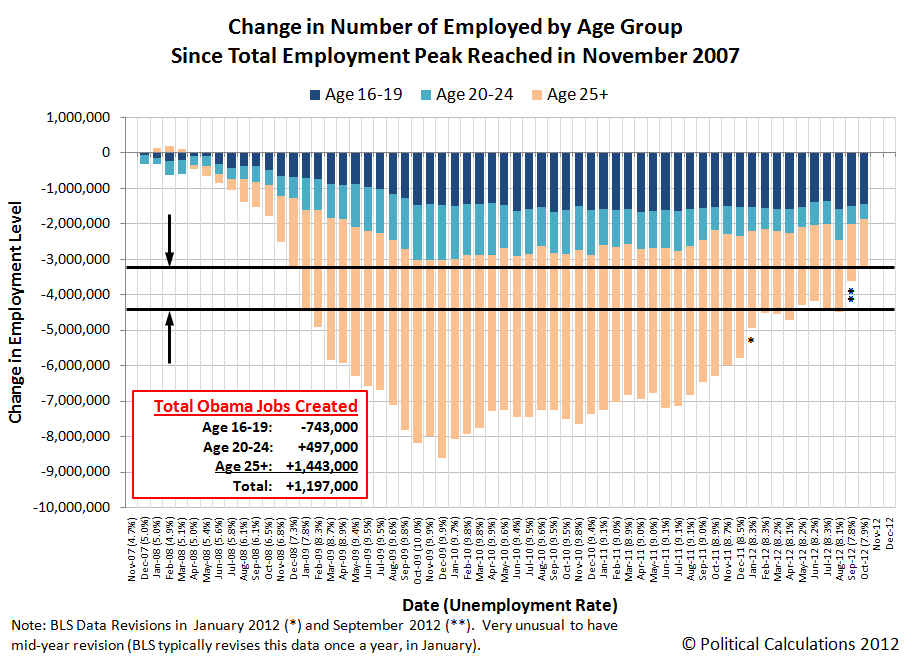 Overall, we find that there are 743,000 fewer employed teens through October 2012 as compared to January 2009, while young adults between the ages of 20 and 24 saw their numbers increase by just 497,000. Adults Age 25 or older saw their numbers among the employed ranks of the U.S. workforce increase by a relatively lackluster 1,443,000.

Altogether, that brings President Obama's total jobs created for his presidency up to 1,197,000, about 76% below his claimed job creation figure of 5,000,000. Put another way, President Obama's net job creation ability is less than one-fourth as good as he claims it to be. And where teen employment is concerned, outright negative.

All of the positive net gain in jobs for President Obama have come within the last three months after having been stalled out in the first half of 2012. This outcome is consistent with our observation that the U.S. economy went through a microrecession in the second quarter of 2012, followed by a much more robust performance in the third quarter.

We continue to anticipate that growth in the U.S. economy will decelerate off its third quarter pace, which will likely be more negatively affected by the disruptive effects of Hurricane Sandy in the northeastern United States than we had originally forecast.