How do we know that the Fed pays attention to the things we write? Previously, commenting on the apparent lack of effect that the Fed's latest round of quantitative easing has had on stock prices, we observed:

And now, the Fed has announced that they've gotten the message and are going to start "doing it right" and also buy Treasury securities, which will give this latest generation of QE more "oomph". Interestingly, they've also announced the economic targets that must be satisfied before they will discontinue the plan. All together, that suggests to us that they're thinking the future for the economy in much of 2013 will be somewhat worse than other official sources are letting on....

It looks like that as far as the pace of layoffs in the U.S. is concerned, the impact of Hurricane Sandy lasted for just three weeks. 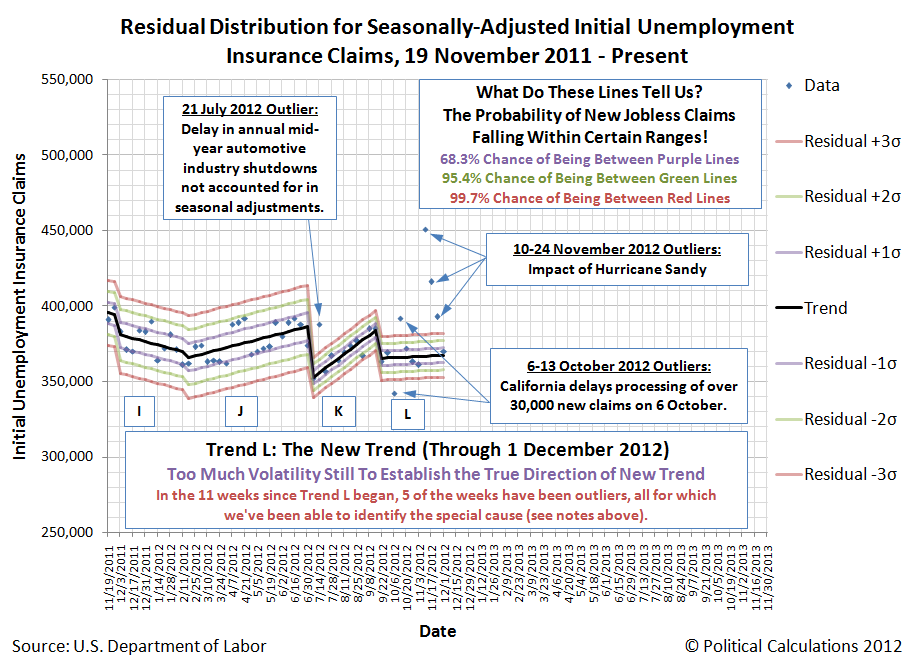 Assuming that the volatility we've previously noted dies down, we should have enough data to begin projecting the new trend in initial unemployment benefit claim filings within a few weeks.

Suppose we converted a house to run entirely off the grid on green, renewable energy sources like solar or wind, so that we would never again have to pay an electric bill or generate any carbon emissions for the power it consumes, as President Obama would seem to desire all Americans do. What possible environmental harm would we cause by lighting it with the soon-to-be-banned 100-watt incandescent bulbs, which we might note are far more friendly for the environment and are much less costly than their CFL replacements? And if the answer is "none", why must we have the government progressively ban all incandescent light bulbs from production?

On a development note, we can't help but notice that if we combined the site traffic our tools for determining individual, family and household income distribution percentile rankings, they would collectively represent the most popular tool ever on Political Calculations. So guess what will be coming soon!...

And speaking of coming soon, here's our Christmas countdown clock!