Political Calculations
Unexpectedly Intriguing!
December 21, 2012
Why There Are Only 12 Days of Christmas

By now, you may be getting very tired of the Christmas carol equivalent of "The Wheels on the Bus Go Round and Round".

We're talking of course about "The Twelve Days of Christmas" song. You know, the one with "five goooooolden rings" and "a partridge in a pear tree". 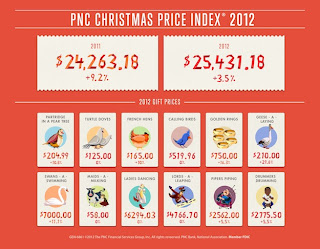 What most people don't fully appreciate about the carol is just how much stuff is being doled out in the twelve days it spans. Not even PNC Wealth Management, the people who calculate the value of the gifts being given out on each day in the song each year, really get it.

You see, they treat the math as if only one gift is being given out on each of the 12 days, whether it be a single set of 10 lords-a-leaping on Day 10 or 3 French hens on Day 3. But here's the thing - if you pay close attention to the lyrics, many of the gifts are repeated on each subsequent day after being given out.

So instead of just one partridge in a pear tree, the recipient of all this true love would actually have 12 - one partridge in a pear tree for each day the song goes on. The "goooooolden rings" would be pretty cool to get, because you'd be getting 40 of them, which you could then equally divide among the 40 milking maids who would start arriving in batches of eight on Day 8.

Needless to say, this is a lot of stuff to keep track of, which is why we've created today's tool, which you can use to keep track of how many total items have been transferred as gifts through each day of Christmas. Just enter the day, and we'll tell you just how many items we're talking about....

And there you have it. Going back to the title of our post "Why Christmas Only Has 12 Days", we find that after 12 days, the gift recipient in the song has accumulated 364 items - enough for every other day of the year (except for leap years, but don't tell the 10 lords.)

You can get a visual sense of all the gifts given during these twelve days in the following image, which was the inspiration for today's post!

This is our final post for 2012 - we'll see you again in the new year. In the meantime, we'll leave you with the only tolerable version of "The Twelve Days of Christmas" that we could find:

Have a Merry Christmas!