According to the December 2012 employment situation report, job growth stalled out in the final three months of 2012, as the number of employed Americans (143,305,000) was nearly unchanged from the levels recorded in the previous two months.

That outcome is consistent with our earlier observation that the fourth quarter of 2012 would likely see a significant deceleration in economic activity following the comparatively robust pace of growth recorded in the third quarter. 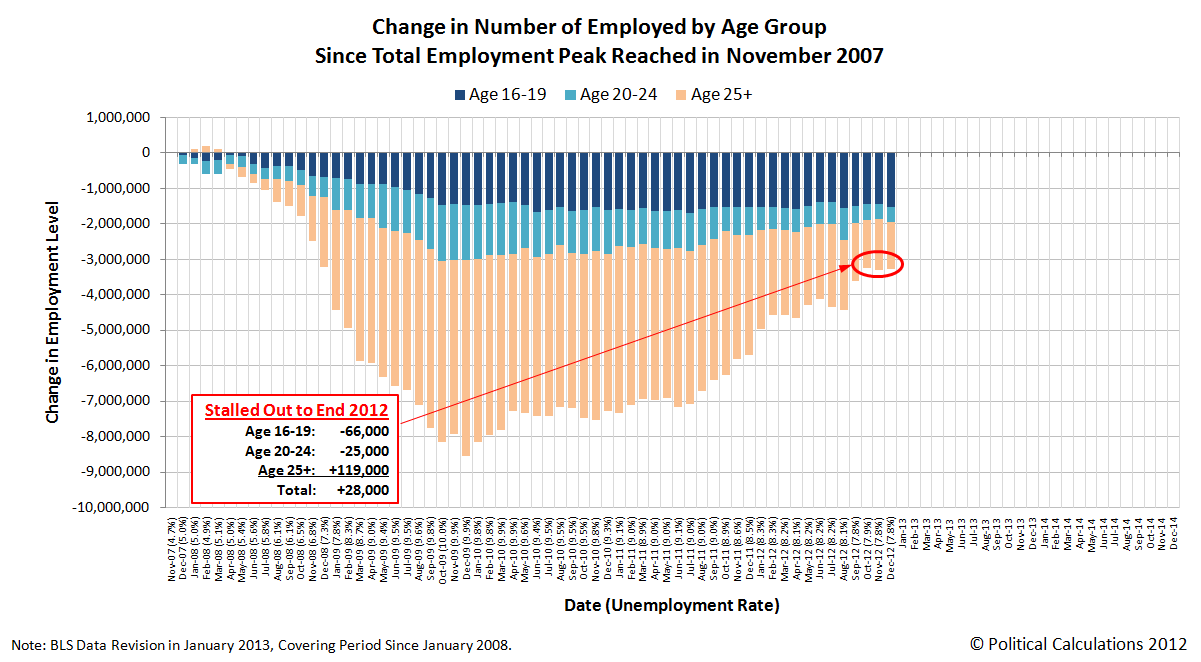 The latest employment situation report revises all the employment data obtained in the seasonally-adjusted household survey portion of the report going back to January 2008 to account for updated seasonal factors, which is typically done with the December jobs repot each year. Our chart in this post reflects these revisions, which affect the period of time in which the U.S. economy first went into recession (it peaked in December 2007 and began declining in the months afterward) and its subsequent recovery.

Perhaps the most remarkable aspect in the chart above is that there has been no effective improvement in the employment situation for U.S. teens since the recession officially ended in June 2009. In fact, since October 2009, which marks the effective end of the decline in the number of employed teens, the number of working teens in the United States has held level at approximately 4,382,000, plus or minus 152,000 teens, in all the months since.

As such, the disappearance of jobs for U.S. teens represents a very large share of the jobs gap that has restrained the recovery of the U.S. economy.

On a final note, the January 2013 employment situation report, set to be released on 1 February 2013, will reflect more substantial revisions to both the establishment and household survey portions of the report, with the household survey portion being updated to account for the U.S. Census Bureau's annual update of the U.S. population. Data from December 2012 or earlier will not be likewise adjusted, which may make direct comparisons between data being released in 2013 and data from earlier years really problematic.