With their hope for building a Death Star to stimulate the U.S. economy now dashed because of "budget constraints", the only hope left for the people who signed onto the White House petition in support of the project turned out not to be Obi-Wan Kenobi, but rather a radical plan to create change - specifically a plan to mint a one-trillion dollar coin that might perhaps be used to pay for the Emperor's evil endeavors. 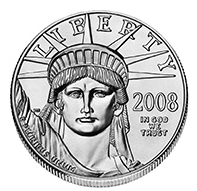 Their new hope was to make a special American Eagle Platinum Bullion Coin and simply stamp "One Trillion Dollars" on it, which to us seems really lame. After all, this represented a real opportunity to go onto what we'll call the "platinum standard", so it seemed to us that the coin should be made out of $1,000,000,000,000 worth of platinum. Because that would be extra special!

That seems like a lot, but physically, that much platinum would only occupy almost 21,427 cubic feet of space, just enough to fit inside this modest home design of "rare beauty".

Now, here's where it gets interesting, because all the platinum that has ever been mined on Earth would fit in a room that's just 25 cubic feet in volume. That would leave the U.S. Mint about 21,402 cubic feet of platinum short of what would be needed to do the job properly.

So we find that the trillion dollar coin fanatics plan was never feasible and instead recommend that they should return to their original Death Star ambition. At least that plan stands a better chance of achieving success - especially now that the U.S. Treasury has officially killed their hopes for the trillion dollar platinum coin.

Until then, these stormtroopers of progress will have to go back to their day jobs of repressing the portion of the population that still has free will.