We didn't know this until yesterday, but apparently, our "What's Your Income Percentile?" tool is the second most highly ranked result on Google if you search for "household wealth percentile". Which we found out only because someone who works for the Federal Reserve Board came to our site after performing that exact search on Monday, 28 January 2012!

Well, that's not good enough, is it? We want to own the #1 result for that particular Google search and we're going to get it by building a tool that you can use to see how your household's net worth ranks among all U.S. households!

But first, we'll need to you to determine your household's net worth, for which we'll point you to Bankrate.com's Net Worth Calculator.

Once you have it, enter your household net worth into our tool below, and we'll estimate your percentile ranking among all Americans (as recorded by the U.S. Census in 2010!) [If you're among those Americans who owe far more on your loans than you have assets or who are still underwater on your mortgage and have a negative net worth as a result, enter your net worth as a negative value - just like the default value!]

And now you know just what percentage of U.S. households have a net worth that is equal to or lower than yours! Our chart below shows our model for the distribution of net worth in the United States and how it compares to the data recorded by the U.S. Census. 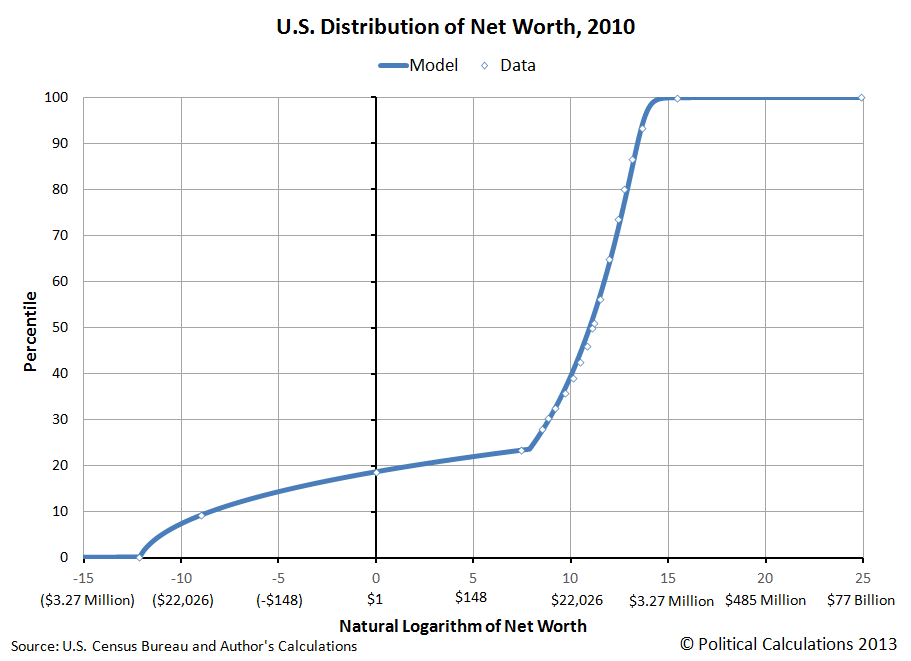 That dot in the upper right hand corner? That's the highest net worth we could find for an American, which according to Bloomberg, turns out to be Bill Gates, who had a net worth of over $64.4 billion on Monday, 28 January 2013.

Update 9 March 2013: Retitled from "The Distribution of Net Worth in the United States".

Update 11 November 2013: If you enter a value of 0 for the net income, the tool above will return a percentile ranking of 100%. This is an artifact of the math, where we calculate the natural logarithm of the net worth you enter. Unfortunately for us, the logarithm of zero is undefined, which is why this result occurs (it's similar to the situation that exists when you attempt divide a value by zero.)

To work around that issue, you can borrow a technique from the field of numerical analysis - enter values that are close to, but not equal to zero, such as 1 and -1, then take the average of these results to represent the percentile for zero household net worth.