Political Calculations
Unexpectedly Intriguing!
January 21, 2013
What Is Really Behind the Rally in Stock Prices?

Craig Newmark points to some interesting analysis that suggests that the recent run-up in U.S. stock prices can be attributed to the newest rounds of quantitative easing:

What is clear is that the recent market rally is once again being driven by the Federal Reserve's QE programs. Money is flowing out of bonds, and the dollar, and into equities. The weekly chart below shows the decline in the market this past September and October as excess reserve balances with the Fed were drawn down. The subsequent rally has been fueled by the Fed as it has pumped reserve balances sharply higher. 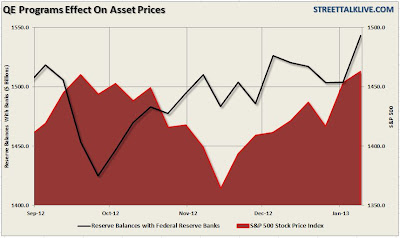 But here's the thing. The rally started a month too early for the Fed's QE efforts to be responsible for it. Here, the Fed's latest QE efforts (let's call it QE 4.0) really only began properly on 12 December 2012. The rally, on the other hand, began after stock prices bottomed on 15 November 2012 - a month before the Fed announced it would expand its balance sheet and long after the previous generation QE 3.0 was initiated in August 2012.

So the Fed's quantitative easing isn't behind the stock market rally. Instead, we can demonstrate that investor expectations for future dividends is behind it.

Following the 6 November 2012 national elections in the U.S., influential investors began racing the clock to beat the expiration of low tax rates for dividends after the end of the year, which were now guaranteed thanks to the outcome of the elections.

Beginning after the market's close of business on 15 November 2012, large numbers of U.S. companies began announcing that they would pay out extra or special dividends before the end of the year.

That activity focused investors on the fourth quarter of 2012 for setting stock prices, which began rising along with investor expectations for the dividends that would be paid out before the end of the year.

That activity continued up through 20 December 2012, which marked the end of the dividend futures contracts for the fourth quarter of 2012.

After that point, investors shifted their attention to a more distant point in the future - to the second quarter of 2013. Stock prices have continued to rise in the rally because they started the month at a level below where the expected change in dividends per share for 2012-Q2 would place them. Today, investors remain focuses on 2013-Q2 in setting stock prices, which we observe as the change in the growth rate of stock prices converging with the expected change in the growth rate of dividends per share for that future quarter.

Our animated chart below shows this transition in the period from 20 December 2012 through the futures for 21 January 2013, along with the shift in focus of investors from 2012-Q4 to 2013-Q2, which you can see as the sudden 5-month leftward shift of the green/red trailing year future dividends per share acceleration data.

And that's why the rally that began back on 15 November 2012 has continued to run. Investors had better hope that the Fed's latest QE efforts start affecting asset prices soon, because the alternative future points in time for where investors might next choose to focus their attention in setting stock prices aren't as pretty.