Did you ever wonder how many households there were in the United States in 1925? Or maybe you just want to project how many there will be in 2015?

If so, you've come to the right place! Our latest tool takes data collected by the U.S. Census every 10 years from 1900 through 1940, and then annually beginning in 1947 to estimate the number of households there were in the U.S in a given year.

You just need to select your year of interest in the tool below and click the "Calculate" button!

Although we've modeled the number of households in the U.S. as a function of time, in reality, it would be more proper to describe it as being a function of population, demographics and income. Time simply works as a catchall for these factors.

In building the tool however, we realized that there are two distinct periods in U.S. history where the number of households is concerned: the period up to and including 1947 and the period ever since. Our chart below illustrates those two periods: 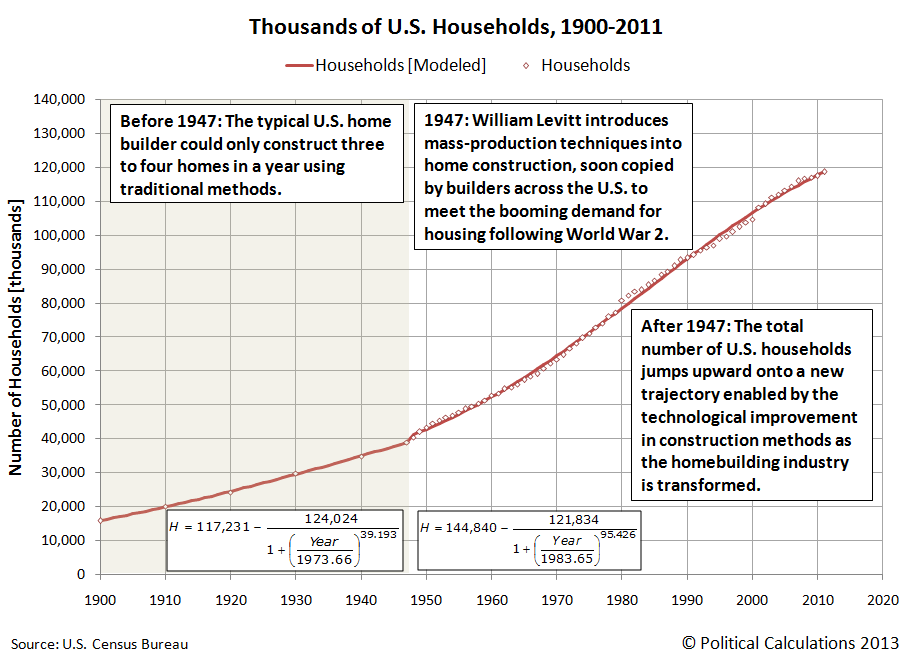 As best as we can determine, the shift between the two periods was caused by a technological change - the introduction of mass-production techniques in U.S. home construction by William Levitt in 1947.

These technological improvements were quickly adopted by home builders across the United States, transforming the industry from a large number of local builders who might only construct three to four homes in a year, to one dominated by regional and national builders capable of constructing hundreds or even thousands of dwellings per year.