As we expected, the number of new jobless benefit claims jumped from the low level reported in the previous week. Let's show where things stand now, then get to some analysis - our chart below shows where we are with respect to the most recently established trend for new jobless claims: 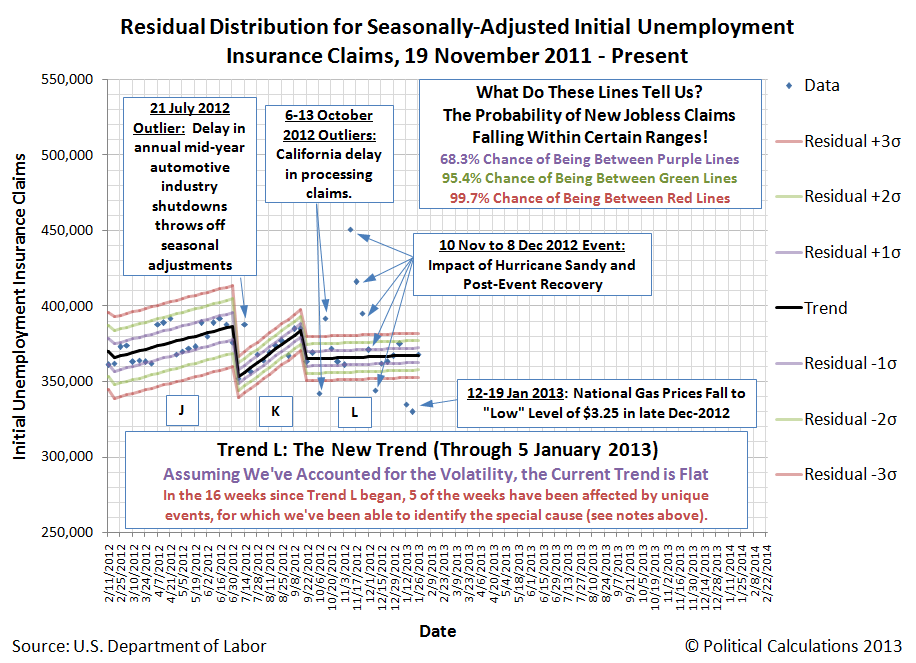 The number of people filing for unemployment benefits for the first-time increased to 368,000 in the week ending Saturday, up from the previous week's level of 330,000, the Labor Department said Thursday. That figure was the lowest in five years.

Economists had speculated the sharp drop earlier in January could have been related to the difficulties of making seasonal adjustments after the holidays and at the start of a new year. Last week's increase could be offsetting overstated decreases.

Ah yes. The difficulties of making seasonal adjustments related to the timing of the Christmas and New Years' holidays. Because some speculating economists just never know what days of the week those events might fall upon from year to year, which in their minds means the data jocks at the BLS who have actually worked out the seasonal adjustment factors using years of data can't possibly account for these seemingly random events on the calendar.

But what level of jobless claims did the speculating economists expect? Reuters captures their expectations:

The number of Americans filing new claims for unemployment benefits bounced off five-year lows last week, pulling them back to levels consistent with modest job growth.

Initial claims for state unemployment benefits increased 38,000 to a seasonally adjusted 368,000, the Labor Department said on Thursday. The prior week's claims figure was unrevised.

Economists polled by Reuters had expected claims to increase to 350,000.

So they were off, but then those speculating economists blamed those pesky seasonal adjustments again:

Claims have been very volatile this month, dropping sharply in the week ended January 12 and maintaining the trend in the following week. That was largely because the model used by the department to smooth out the seasonal variations has been unusually generous during the first three weeks of January.

The volatility in the so-called seasonal factors has to do with the timing of holidays and when the weekends. The January calendar this year is aligned to 2008 and claims have generally followed a similar pattern.

Now, that's something we can check! First, we used Zeller's Algorithm to find the preceding two years in which Christmas fell on a Tuesday, just as it did in 2012, which of course is followed by New Years Day, again on a Tuesday, just a week later. Then we looked up the seasonal adjustment factors for the first four weeks of January that the BLS reported it used in each of those years. Our results are summarized in the table below:

Looking at the data listed in our table above, we find that the seasonal adjustment factors for both 2002 and 2008, the two most recent years in which both Christmas Day and New Years Day fell on Tuesdays before they repeated that feat now in 2013, were far more generous in the size of their adjustments than were the adjustments made for 2013's raw figures.

It looks like some speculating economists aren't getting either their calendars or their facts straight!

Now, let's directly compare the factors for 2008 with 2013. Here, we find that the seasonal adjustment factors for the first, second and fourth weeks of January would be more generous in lowering the number of seasonally-adjusted claims reported in 2008 as compared to 2013. Only the data for the third week of January in 2013 would be more generously adjusted than the same data would have been in 2008.

Let's next see how that played out with respect to each week's news of the reported number of new jobless claims in both 2008 and 2013:

In January 2008, the U.S. economy had begun falling into recession after the nation's economic expansion peaked in December 2007. As you might expect, the number of new jobless claims being filed in those early weeks of January 2008 reflected that strength, with the number decreasing in those weeks. Typically, it takes two to three weeks, a full payroll cycle, for a change in economic circumstances to show up in the new jobless claims data, so that's why the first indication that the U.S. was really falling into recession during this time didn't show up in the new jobless claims data until the fourth week of January 2008.

Flashing forward to 2013, we find that 2012 ended on a similar strong note. Here, oil and gasoline prices in the U.S. fell in the last weeks of December to be below $3.25 nationally, and in many regions of the country, retail prices at the pump dropped to or below $3.00 per gallon, which would be a key psychological threshold for U.S. consumers. When prices drop to that level, especially after having been elevated above that level for a prolonged period of time, the psychological effect combined with lower gasoline prices would provide a boost to the economy, as consumers now have both more money to spend on other things along with greater confidence. One full payroll cycle or 2-3 weeks later, that combination of positive factors shows up in much lower numbers of layoffs that are sustained over at least two weeks, until something changes. 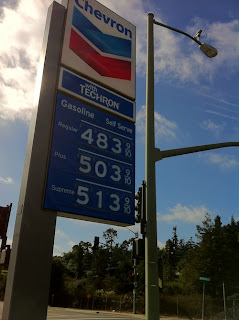 And there the similarity between 2008 and 2013 ends, because on 1 January 2013, President Obama's stimulus Social Security tax cut expired, reducing the take home pay of all working Americans by a full two percent of their income, just as he desired.

What would that sudden reduction of 2% of their income mean in terms of gasoline prices for the typical American household?

Here, we turned to the 2011 Consumer Expenditure Survey, which tells us that an average American household with wage and salary income $49,805 in 2011, which we note is nearly equal to 2011's median household income of $50,054, spent $2,655 for gasoline and motor oil for transportation.

Now, here's where it gets interesting. For a typical American household, President Obama's desired 2% Social Security tax increase would reduce their take home pay by nearly $1000. If we add that figure to the $2,655 that the typical American household spent on gasoline and motor oil in 2011 (and 2012), assuming they consumed the same 754 gallons of fuel, the effect on the economy would be the same as if the cost of gasoline at the pump suddenly spiked upward to $4.84 per gallon.

That's quite a lot higher than the $4.00 per gallon level that gasoline prices spiked higher to hit and surpass in April 2008, which is the event that firmly pushed the United States economy into recession, which then led to the failure of two-thirds of the nation's automotive industry at the end of 2008 and beginning of 2009.

At this point, we've only seen about half the initial impact of that change, as the new jobless claims numbers for the week ending 26 January 2013 are just reflecting the period into the second week of January. Given the delay in when most companies would be adjusting their paycheck tax withholding related to the fiscal cliff debate at the beginning of the year, the effect of President Obama's desired 2% tax hike on all wage and salary-earning Americans will continue to play out over the next several weeks.

So you can expect the number of new jobless claims to increase in the weeks ahead. At least you can't say that the numbers are unexpected!