This may begin to change as early as later this morning, but considering that U.S. FICA payroll taxes were increased by 2% at the beginning of 2013, thereby reducing most working Americans take-home pay by a similar percentage of their income, we would have expected to see the effect show up in higher levels of new jobless claims. Our chart below shows where they officially stand through the week ending 16 February 2013, which really describes the job layoff picture that existed in the U.S. some two to three weeks earlier, between 26 January and 2 February: 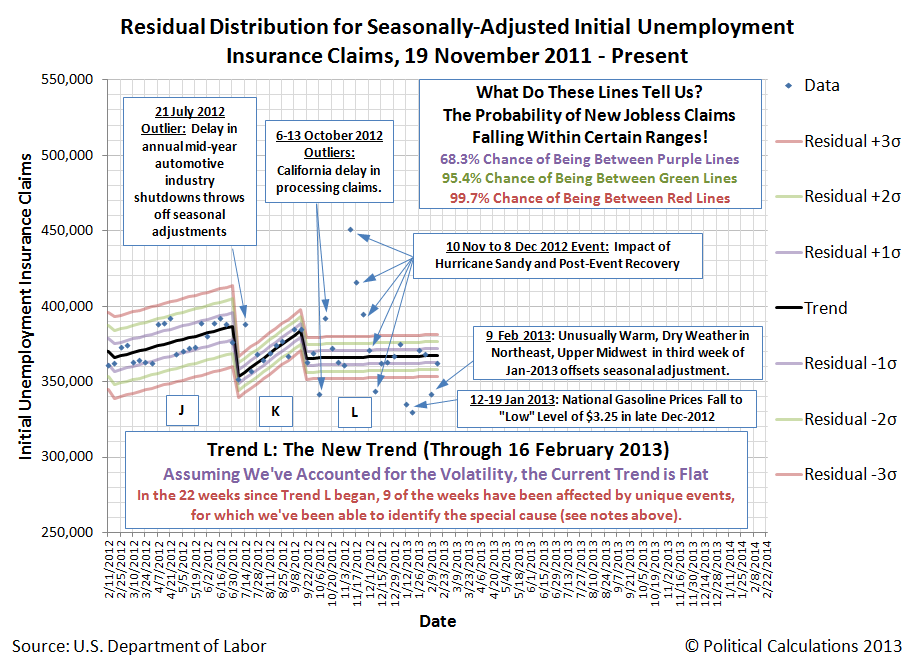 Essentially, outside all the explainable volatility that has characterized the period since 22 September 2012, the current trend remains flat, which suggests several possibilities that might account for the so-far curious lack of reaction to the negative impact of higher payroll taxes:

As for whether or not the 2% of income hike in payroll taxes is having a negative effect on the U.S. economy, it definitely would seem to be taking a toll:

Wal-Mart Stores Inc. on Thursday joined a parade of retailers, restaurants and consumer-goods companies worried about the economic impact of the recently restored federal payroll tax that has left Americans with less money to spend.

The world's largest retailer, Burger King Worldwide Inc., Kraft Foods Group Inc. and others are lowering forecasts and adjusting sales and marketing strategies, expecting consumers with smaller paychecks to dine out less and trade down to less expensive purchases.

The expiration of the payroll tax cuts that knocked 2% off consumers' take-home pay is having an impact, these companies say. It will ding a household with $65,000 in annual income $1,300 this year, and shift $110 billion overall out of consumers' hands, estimates Citigroup.

The average U.S. household in 2012 had an annual income of $69,667, which would see its take-home pay reduced by just shy of $1,400. Meanwhile, the the median U.S. household had an annual income of $50,054, so its take home pay will be reduced by just over $1,000 thanks to President Obama's desire to increase the payroll tax rate on wage and salary income.

Interestingly, the same article provides some evidence of our fourth option, which suggests that employers have become better able to cope with Americans having less money to spend:

Now, Wal-Mart is stocking more of its shelves with cheaper products, and smaller-size packages of diapers, toilet paper and snacks. Burger King is cutting its Whopper Jr. sandwich to $1.29 from about $2, and focusing advertising on its value menu items rather than higher-price salads or smoothies.

These companies say the changes could be long-lasting and are revamping operations to better cater to consumers pinched by higher taxes, stagnant wage growth and rising gasoline prices, which jumped nearly 50 cents a gallon in the past month alone.

No matter what, that these major retailers, restaurants and suppliers have these strategies ready to go so quickly just doesn't speak well to their expectations for the nation's economic situation in 2013.