From all appearances, the U.S. economy is now performing much more strongly than China's economy. 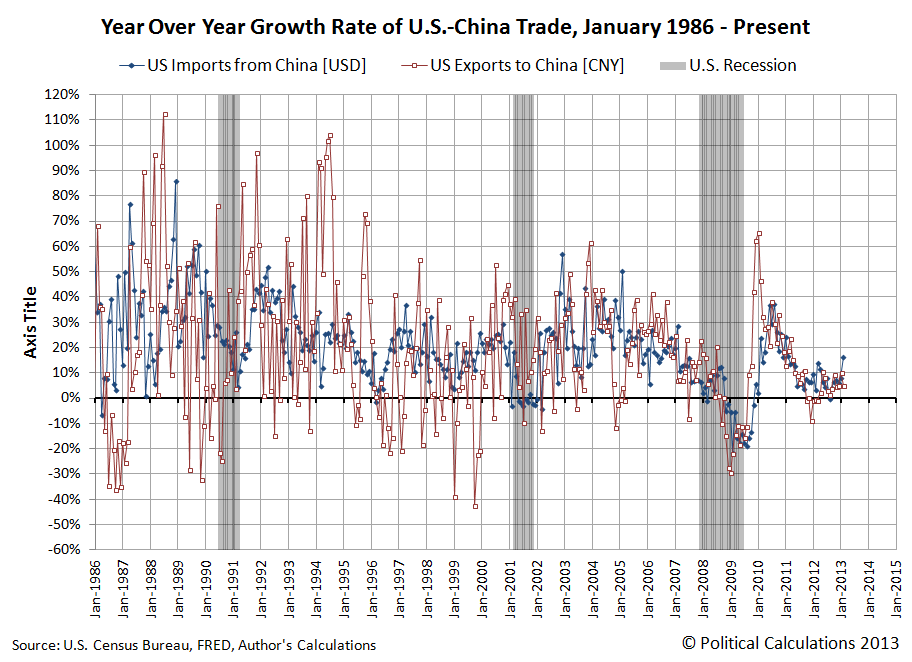 Going by the growth rate of the value of trade between the two nations, it appears that the U.S. economy turned a corner in August 2012, when it briefly turned negative. Since then, the relative health of the U.S. economy appears to have improved, which we see in the form of a rising demand for imported goods. For the data just released for February 2013, it appears that pace of economic growth in the U.S. is outstripping the rate of growth in China.

Meanwhile, the pace of growth of the Chinese economy appears to have rebounded off its slowness from last year, confirming that nation's economy has likewise improved, although not at the same rate as the U.S. economy.

This period of increased demand for imported goods in the U.S. approximately coincides with beginning of the sudden inflation in new home sale prices, as the housing sector of the U.S. economy began to show signs of a new bubble beginning to inflate in August 2012. Here, U.S. new home sale prices began to surge at a rate not seen since the first U.S. housing bubble ignited into its rapid inflation phase after November 2001.

That activity, in turn, appears to be what has sparked an increasing level of Chinese exports to the United States. We can confirm that much of this increase was driven by the improvement of the housing sector of the U.S. economy, as 54.6% of the year-over-year net increase in the total dollar value of goods imported into the U.S. from China in 2012 is represented by such goods as household and kitchen appliances, furniture and especially other kinds of household items.

Or rather, exactly the kinds of things you would expect to be in demand to support an improved housing sector of a nation's economy, which we'll take another look at soon.