Political Calculations
Unexpectedly Intriguing!
May 8, 2013
After the Dividend Cliff

As expected, following the end of a record-breaking four-month long period in which publicly-traded U.S. companies incented by the fiscal cliff crisis set all-time records for the number of dividend increases, cuts and special (or extra) dividends paid, April 2013 was somewhat boring by comparison.

The recent rally in stock prices, beginning after 15 November 2012, is a direct result of these companies' reaction to the fiscal cliff crisis.

All in all, there were some 2,946 declarations made by the approximately 3,687 publicly-traded companies in the United States announcing some sort of action related to their companies' dividend policies. Of these, 36 involved companies paying an extra, or special dividend payment to their shareholders and 203 involved dividend increases. These figures are well below the all-time record levels of 483 extra dividends announced in the month of December 2012 and the 298 dividend increases announced in February 2013.

But the real news is that the number of U.S. companies announcing dividend cuts is continuing to be consistent with recessionary forces being at work in the U.S. economy. 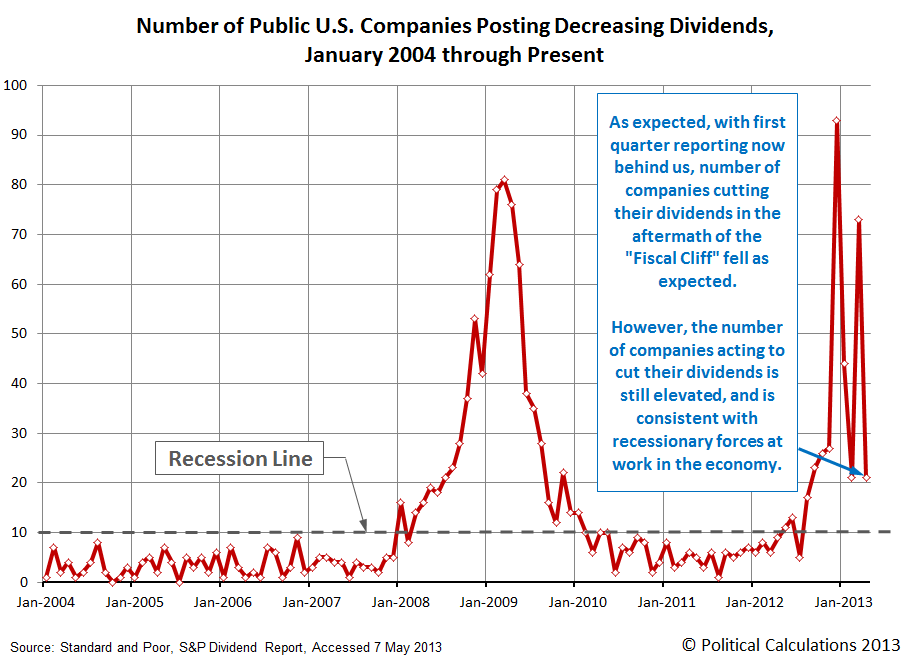 We had expected the number of companies announcing dividend cuts to fall significantly after the first quarter, when many companies that had raided the funds they had set aside to pay dividends in 2013 to instead pay extra or special dividend payments before the end of 2012 to avoid higher dividend tax rates taking effect in the new year and unable to replenish them from their cash flow acted to cut their dividend payments for 2013. The all-time record of 93 U.S. companies announcing dividend cuts in a single month was set in December 2012.

Most of these extra dividends payments were specifically taken from the funds set aside to pay dividends in the first quarter of 2013. Consequently, most of these dividend cut declarations related to the amount of dividends that these companies would pay out in 2013-Q1.

Now that we're past the first quarter, this aspect of the U.S. federal government's fiscal cliff crisis is largely behind us and the number of companies acting to cut their dividends is once again above the level of 10 U.S. companies announcing dividend cuts per month that marks the dividing line between a U.S. economy that is "healthy" and one that is experiencing recessionary conditions.

It is however below the levels that were being recorded in second half of 2012, when the nation's economic growth slowed to a near zero-growth rate crawl, so at least there is some indication of improvement.