Take a look at the following chart, a snapshot of the trading activity on 8 October 2013 through 2:02 PM EDT: 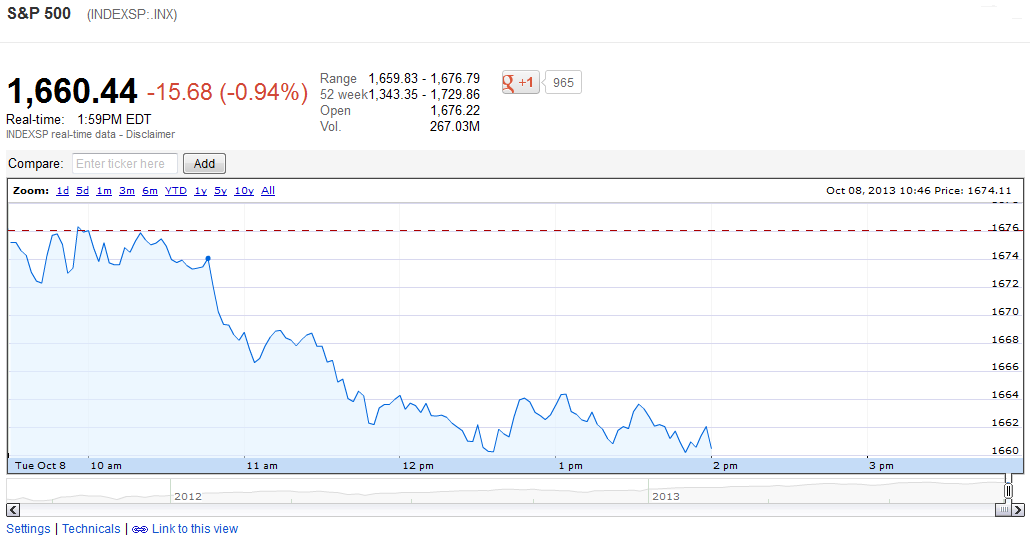 Now, looking at that chart, we can identify 10:46 AM EDT as the approximate point in time, give or take a minute, at which the investors suddenly reacted negatively to some event. Since it typically takes investors just two to four minutes to react to an event they weren't expecting, that actually market the end of the period of time in which we would need to look for a market moving event. Want to guess what major market moving news hit the wires within that window of time?

We won't keep you in suspense. The noisy irritant in the White House is behaving as we expected. USA Today's David Jackson reports:

President Obama called House Speaker John Boehner on Tuesday, again telling the Ohio Republican he will not negotiate on budget items until the GOP-run House ends the shutdown and raises the debt ceiling.

Obama also scheduled a White House statement on the budget shutdown for 2 p.m.; he will also take questions from reporters.

"The president is willing to negotiate with Republicans -- after the threat of government shutdown and default have been removed -- over policies that Republicans think would strengthen the country," said a White House readout of the 10:45 a.m. phone call to the House speaker.

The readout noted that Obama "repeated what he told (Boehner) when they met at the White House last week."

Boehner spokesman Brendan Buck confirmed the conversation, saying that "the president called the speaker again today to reiterate that he won't negotiate on a government funding bill or debt limit increase."

Now, that's what we would describe as a presidential-class tantrum, especially because the President had to go out of his way to deliver it.