Political Calculations
Unexpectedly Intriguing!
13 January 2014
The S&P 500 Behaving as Expected in the First Week of 2014

As expected, the S&P 500 spent the first week of 2014 transitioning to the slow-growth trajectory that we anticipated it would follow while investors focus their forward-looking attention on 2014-Q4 in setting today's stock prices. 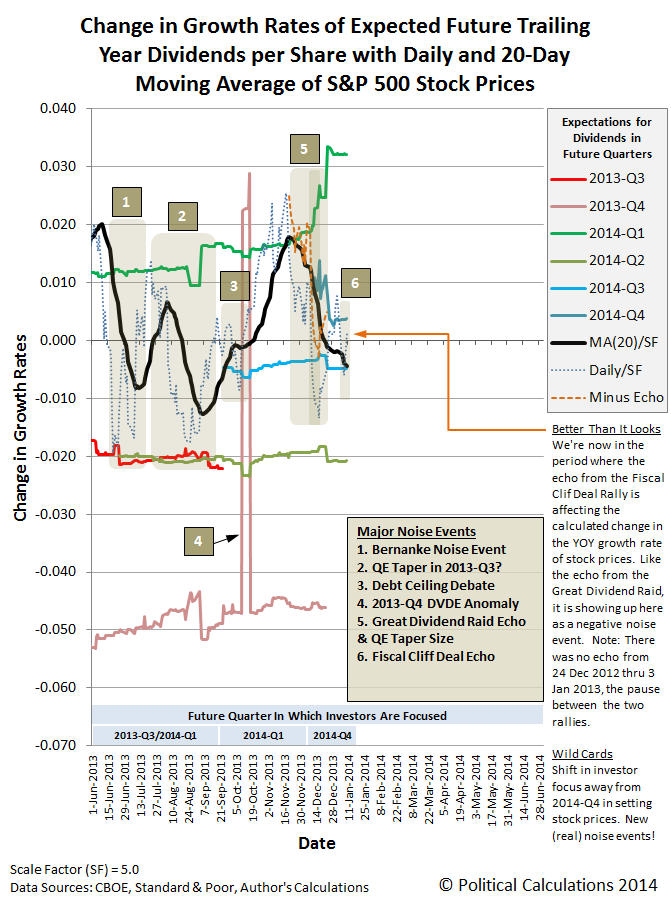 We should note that following the one-year anniversary of the Fiscal Cliff Tax Deal on 3 January 2014 and the beginning of the stock market rally associated with it, we have entered a period in which the echo effect from that event is affecting our calculation of the Year-Over-Year growth rate for stock prices in our chart.

As with the one-year anniversary of the Great Dividend Raid Rally, it is showing up in our chart in the form of a negative noise event, where we see the acceleration of the S&P 500's stock prices fall below the level associated with the future expectations indicated by the year-over-year acceleration in 2014-Q4's dividends per share - the future quarter to which we believe that investors have currently focused their attention based upon what we observed in the data during the pause between the echoes.

From our past experience in quantifying the echo from the Great Dividend Raid, it will take at least 6 to 10 observations to somewhat accurately quantify the effect of the Fiscal Cliff Deal Rally echo, so it will be another week before we have a good sense of its magnitude and can adjust for it accordingly.

For now, we'll note that the acceleration of the S&P 500's daily stock prices are very likely elevated above the level where the expectations for dividends in 2014-Q4 would set them, which means that stock prices will tend to be flat to lower in the immediate future, absent new noise events, a shift in forward-looking focus away from 2014-Q4, or significant changes in the amount of dividends expected to paid in that future quarter.