If you wanted one word to describe the U.S. economy in the first quarter of 2014, the word 'tractionless' comes immediately to mind.

The latest real evidence for that assessment comes not from the latest jobs report, which many found disappointing but instead from the U.S. stock market, where once again, the number of publicly-traded U.S. companies who announced they would be cutting their dividends during the month of March remained at elevated levels. Levels that are consistent with recessionary forces at work in the U.S. economy: 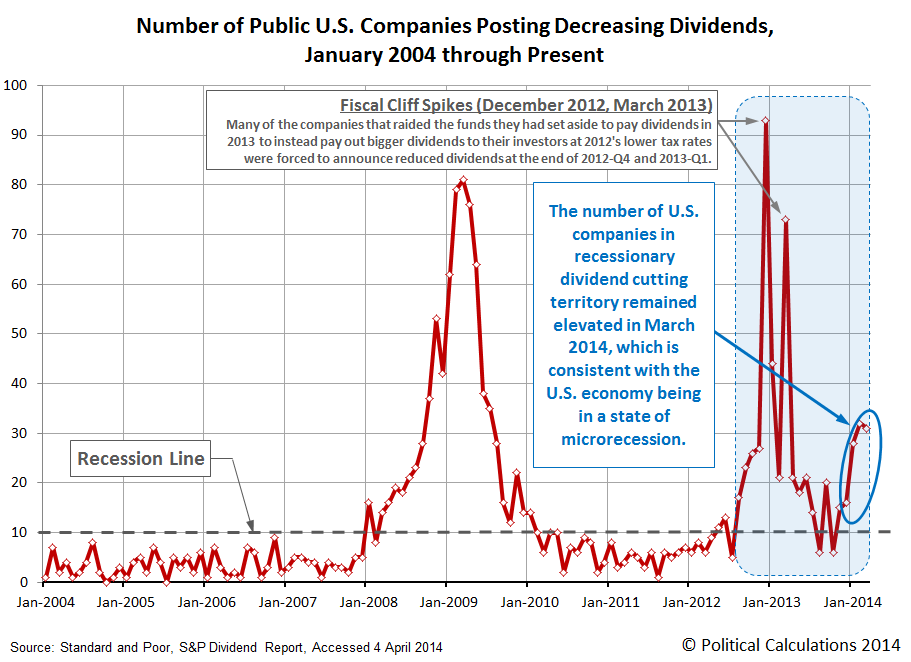 Unlike the unemployment rate, which is usually a lagging indicator of the health of the economy, the number of companies announcing dividend cuts each month is a coincident indicator - something that tells us about the state of the economy today, in real time.

And what the elevated number of companies acting to cut their dividends in March 2014 tells us is that at least some parts of the U.S. economy are contracting rather than expanding.

And now for non-manufacturing industries, which is where most of the drag on the U.S. economy would appear to be originating, and which one respondent's comments points the finger at a major reason why:

Let's run through the non-manufacturing industries where we have some insights briefly:

Mining: The sluggishness in the U.S. mining industry can likely be traced directly back to the Chinese government's decision last year to slow down the growth of the nation's economy. With that nation growing much more slowly, it requires far fewer resources produced through mining to sustain it.

Educational Services: There is a major slow down underway for education services, particularly for for-profit universities, which are reporting declining enrollment levels.

Health Care & Social Assistance: We cannot do any better than to quote what one respondent to the ISM's survey said about what's hurting that particular industry:

Real Estate, Renting & Leasing: The major story here is the decline of demand for real estate in the U.S., where the rapid rise in prices driven by large investment firms who were buying up large quantities of distressed residential properties from 2012 to 2013 ultimately led them to stop buying so much property as their potential returns on their investments declined. Combined with the Fed's decision to taper its quantitative easing programs, which made buying real estate more expensive because of the corresponding hike in mortgage interest rates, the amount of economic activity in the real estate sector has been falling as a result.

And there you have it. While likely not enough to pull the entire U.S. economy down into recession, we at least now have some idea of which parts of the economy are experiencing recessionary conditions at the present time.