Political Calculations
Unexpectedly Intriguing!
23 July 2014
The Best and Worst States for Teen Jobs in the U.S.

What are the best and worst states for U.S. teens between the ages of 16 and 19 for finding jobs?

To find out, we turned to the U.S. Bureau of Labor Statistics, whose Geographic Profile of Employment and Unemployment provides the data by detailed age group on an annual basis for the years from 1999 through preliminary figures for 2013. We used that data to calculate the ratio of the number of employed U.S. teens from Age 16 through 19 with respect to their numbers in the U.S. population to create the following chart. 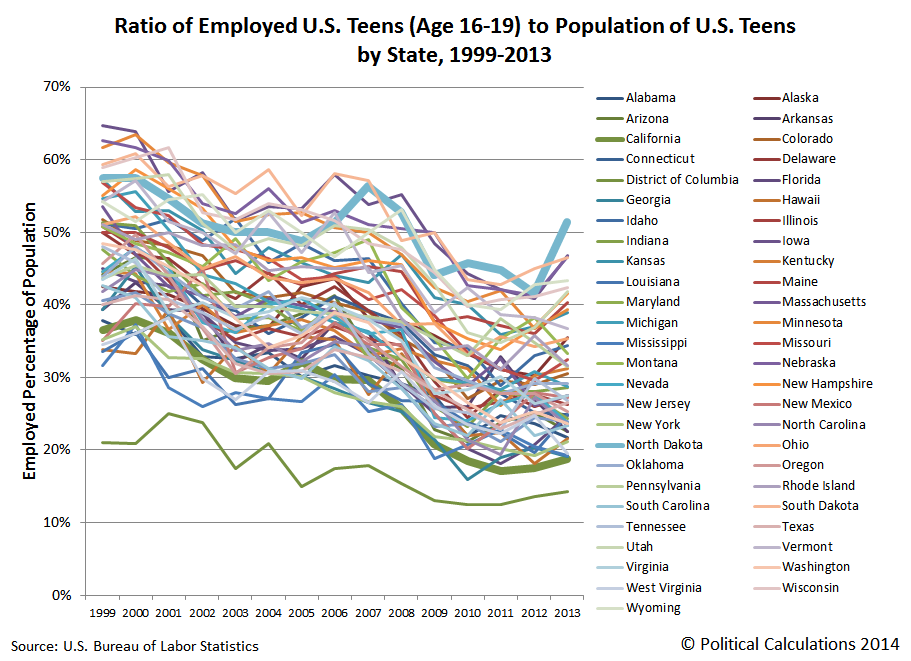 In the chart, we see that North Dakota is currently the leader among all states, surging considerably in 2013. We also see that the state has consistently ranked high by this measure from 1999 through the present. That's likewise true for the states that also ranked highly in 2013. The Top 5 states for teen jobs are:

Meanwhile, we observe that the worst place for jobs for U.S. teens is the District of Columbia, which currently and has chronically occupied the basement in the rankings by a wide margin during each year for which we have data.

But since this geographic region reserved to be the seat of the nation's capitol is not a state, the state that really ranks as being the worst state for job-seeking teens in 2013 is California. Here are the Bottom 5 states for teen jobs:

In 2013, these five bottom-dwelling states were home to 23.6% of the entire population of 16-19 year olds in the United States.