Political Calculations
Unexpectedly Intriguing!
September 25, 2014
A Snapshot of the Expected Future for Dividends

Earlier this week, we indicated that we were about to get our first glimpse of the expected future for the S&P 500's quarterly dividends per share for the third quarter of 2015.

We now have it! Here's the snapshot of the amount of cash dividends expected to be paid in each quarter between the present and the 2015-Q3, according to the Chicago Board of Exchange's implied future dividends per share indicators: 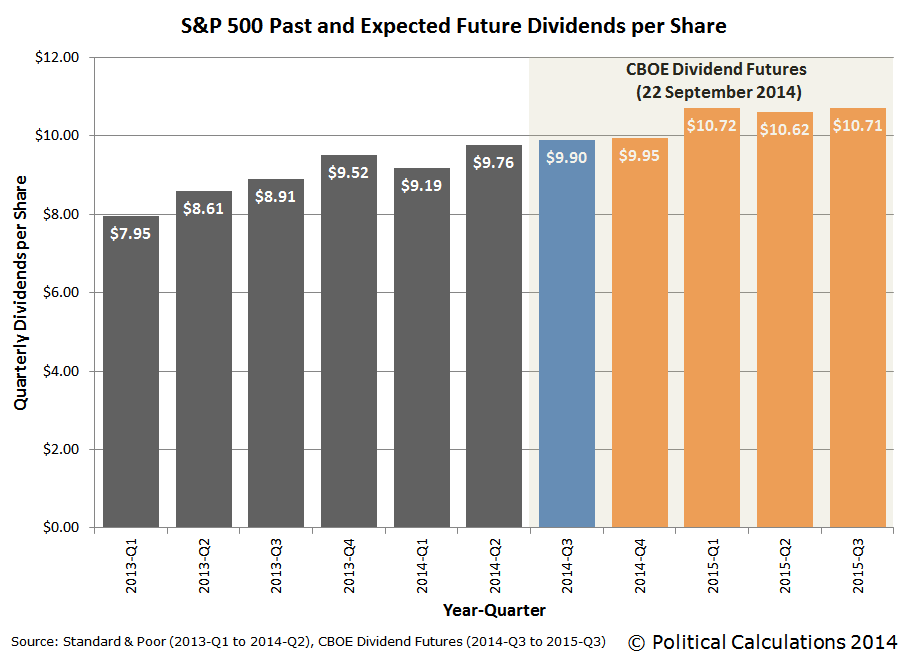 This chart mixes the historic data for the S&P 500's quarterly dividends per share recorded by Standard & Poor [Excel spreadsheet] from 2013-Q1 through 2014-Q2 with the expected future dividends recorded by the CBOE's dividend futures contracts.

But because of how the CBOE's dividend futures work, there's a mismatch between the two sources of data. Here, the dividend futures contracts run through the third Friday of the month ending the indicated calendar quarter, while the S&P data runs to the very end of month ending the indicated calendar quarter. That mismatch in terms results in discrepancies between the quarterly dividends reported by each source of data.

For most quarters, the discrepancies that result from that term mismatch is relatively small, but our readers should expect that the data indicated for the future quarters will be revised.

Update 25 September 2014 11:41 AM EDT: Oh, by the way, in case anyone is wondering why stock prices are down so much and so seemingly unexpectedly this morning, these future expectations are why. We'll explain more next Monday, and then we'll go on vacation for a week....