Political Calculations
Unexpectedly Intriguing!
September 22, 2014
No Surprises for the S&P 500

Although the Federal Reserve met, issued a statement, and Fed Chair Janet Yellen held a press conference last week, none of it meaningfully affected the trajectory of stock prices, which continued to behave consistently with investors focused on the future quarter of 2014-Q4 in setting their expectations for making investment decisions. As expected, our rebaselined model pretty much nailed where stock prices ended the week. 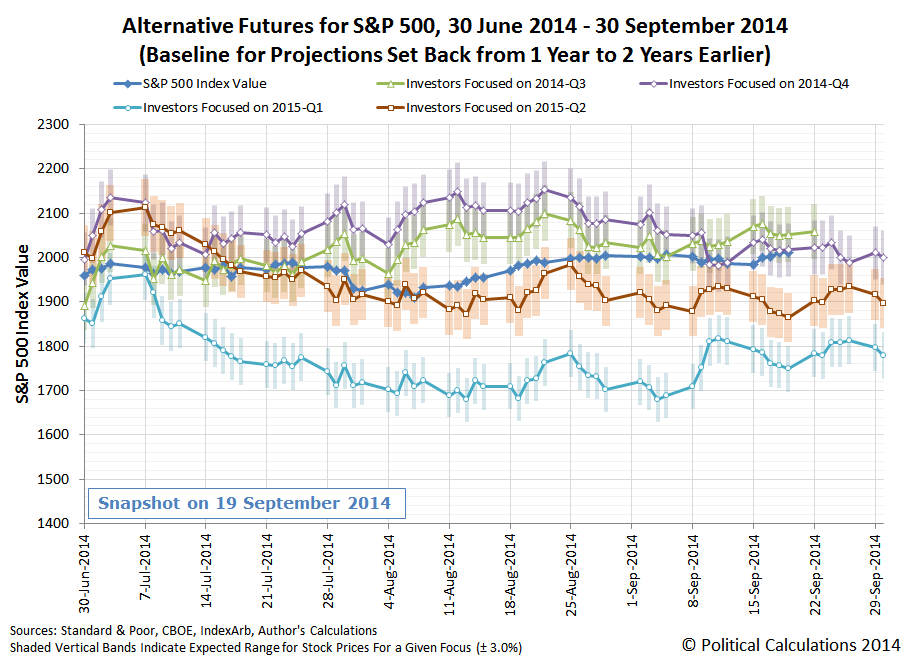 Next week should prove interesting because we'll start getting our first glimpse into the expectations for the future quarter of 2015-Q3!

What was the earliest point in time at which our rebaselined model could have accurately predicted where stock prices ended up on 19 September 2014?

As we'll demonstrate with the following animation, the earliest we could have anticipated that the S&P 500 would close at that particular level was ten days earlier, after the expectations for 2014-Q4 shifted on 10 September 2014. We'll pick up the action as stock prices began transitioning from investors being focused on the more distant future quarter of 2015-Q2 to the nearer future quarter of 2014-Q4 after 25 August 2014.

As we noted last week, we anticipate that stock prices will continue to more closely pace the alternative trajectories indicated by our rebaselined model until mid-October 2014, when the final echoes from the major noise events of a year ago finally dissipate, allowing us to resume using our standard model.