After looking at the overall history of the net change in the number of full time and part time jobs in the U.S. since 1968, we had a question that relates to the job market today: What broke the job market in the United States?

To see what we mean, let's focus in on the period since the official beginning of the so-called "Great Recession" in December 2007, when the previous period of economic expansion in the U.S. last peaked according to the National Bureau of Economic Research before falling into recession. The chart below measures the net change in the number of full time, part time and the total number of jobs from that point through the present. 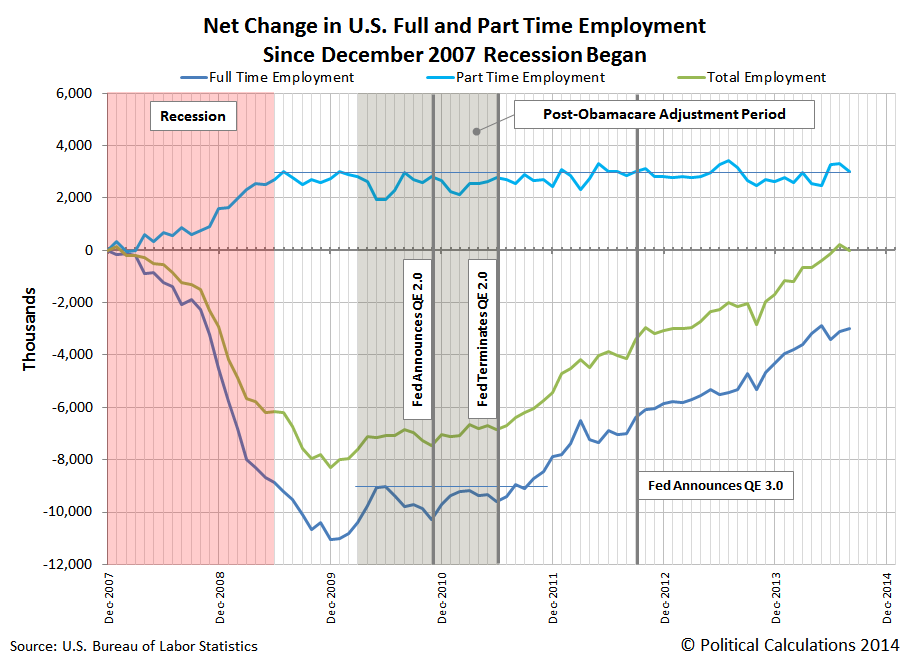 And then, things begin to go haywire in and after March 2010. What had been a robust recovery in full time employment suddenly becomes choked off as working Americans were shunted back into part time employment. The number of Americans working in full time jobs then began to fall until November 2010, which coincides with the Federal Reserve's announcement that it would intervene in the U.S. economy by beginning a new round of quantitative easing to stimulate economic growth.

We won't keep you in suspense. The most likely culprit behind the growth of part time jobs in the U.S. economy was the passage of Obamacare, officially known as the Patient Protection and Affordable Care Act. The chart below shows the stagnation of part time employment in the United States since the Affordable Care Act (ACA) was signed into law in March 2010. That outcome is contrary to what many expected after the passage of the ACA, where the law's changes to the number of hours that an employee could work before being qualified as a full time employee for whom the employer would be required to provide costly health insurance coverage would lead employers to create fewer full time jobs and more part time jobs.

Here, the law changed the definition of what is considered to be full time employment from an average of 35 hours per week to just 30 hours per week.

But it is evident that the feared outcome of more part time jobs being created at the expense of full time jobs has, at least since the Fed began stimulating the U.S. economy through its various quantitative easing programs, has not come to pass. What we observe instead is that it is part time employment that has not increased in any meaningful way since Obamacare became law.

So we'll offer a hypothesis for why that might be: the Affordable Care Act's lowered definition of the number of hours that need to be worked in a week to qualify as full time employment is leading employers to create considerably fewer jobs where the number of hours worked falls in the range between 30 and 35 hours per week.

That range is significant because the Bureau of Labor Statistics and the U.S. Census Bureau, who collect the data on the number of Americans working in full time and part time jobs, did not change their definition of the number of hours of work each week that qualifies as full time employment: a minimum of 35 hours per week.

It is then that part of the job market that Obamacare has broken, and there is some evidence that the U.S. job market is not adding a meaningful number of jobs within that margin. And we suspect that the absence of jobs being created within that margin plays a big role in the assessment of Americans that there is and has been no meaningful economic recovery since the official end of the last recession.