Outside of those limited periods of time where companies change their dividend policies in response to changes in the taxes that apply to the investment income of their shareholders, the number of companies that act to cut their dividends in any given month provides a pretty good indication of the general health of the U.S. economy.

For example, if the economy is relatively free of recessionary conditions and is expanding, we can expect to find fewer than 10 companies that will act to cut their dividends in a given month, indicating that the economy is relatively healthy. But, if contractionary forces are at work somewhere in the private sector, we can expect to find 10 or more companies per month announcing that they are cutting their dividends, indicating that the U.S. economy is experiencing recessionary conditions.

Keep that in mind as you evaluate what happened to the number of publicly-traded U.S. companies that acted to cut their dividends in September 2014: 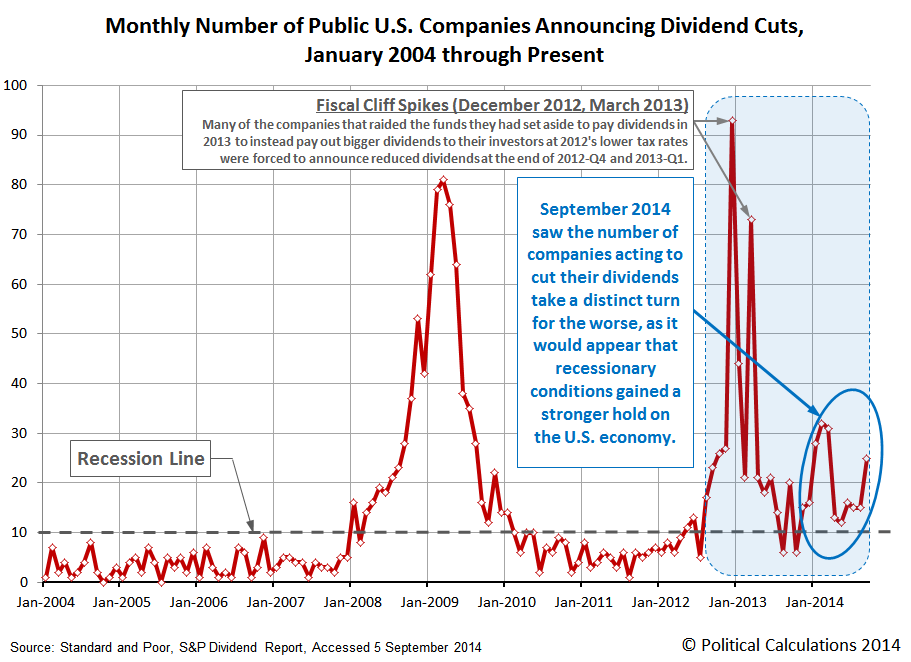 In looking at this chart, it occurs to us that there may be a second threshold that may be significant in evaluating economic conditions in the U.S. Here, while having 10 or more companies per month announcing dividend cuts may be sufficient to indicate that recessionary conditions are present, having that number rise above 20 may indicate that outright economic contraction is occurring.

Let's turn to the pages of Barron's for a discussion of increasing weakness in the U.S. economy:

Based on the recent economic data, it is interesting to note that even as market participants fret about when the Fed will hike rates, we have seen a consistent stretch over the last few weeks of weaker-than-expected US economic reports outnumbering better than expected ones. Yes, the data is still showing consistent growth, but just not to the degree that economists have been expecting or hoping. Pretty much sums up the economic theme of the last five years, doesn’t it?

Coincidentally, one can get that indication in near real time using the indicator provided by the number of companies announcing dividend cuts each month, which certainly beats waiting for economic reports that can lag well behind the nation's real economic condition. Like the monthly employment situation report.