Earlier this week, we saw that the number of publicly-traded U.S. companies announcing dividend cuts in the month of September 2014 increased substantially above the total recorded in the previous several months - up to a level that suggests that the U.S. economy might be experiencing some degree of contraction, just as it did in the first quarter of 2014. We wondered if our other near real-time economic health indicators might also be squawking.

One of our better indicators of the relative health of a national economy is the year-over-year growth rate of the value of goods traded between the United States and China, so we've updated our chart showing those growth rates since January 1986 to see where things stand as of the most recent data available through the month of August 2014. The data in the chart below has been adjusted to account for changes in the currency exchange rates for the U.S. and China over time, so each nation's import growth rate is represented in terms of its own currency. 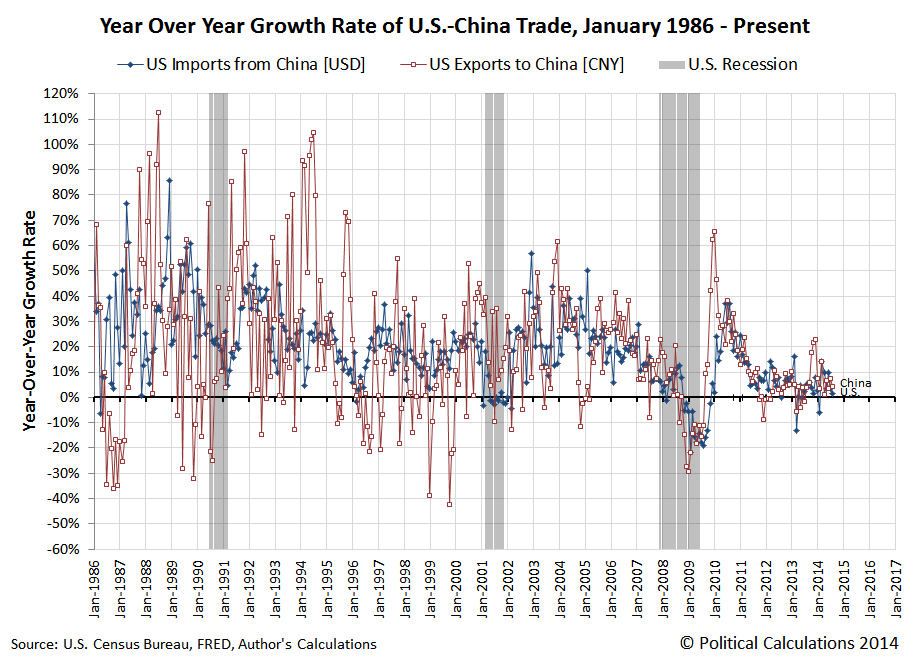 In August 2014, we see that the year over year growth rate of the goods that the U.S. imports from China decelerated to the lowest level recorded since February 2014, corresponding to the period of negative economic growth that the U.S. economy experienced in the first quarter of 2014.

But at 1.7%, it's not in negative territory, which suggests that economic growth in the U.S. was only sluggish in August 2014. We won't have the official trade data for September 2014 until the U.S. Census Bureau releases it on 14 November 2014. China's officially reported trade data is generally considered to be unreliable.

Looking at the year-over-year growth rate of the value of the goods that China imports from the United States, we see that China's economy also slowed, but is growing more rapidly than the U.S. economy, reversing the situation that existed earlier in the summer.