Political Calculations
Unexpectedly Intriguing!
21 November 2014
A Change in Expections for the Future for Stock Prices

Friday, 21 November 2014 saw a major change in the expectations for future dividends per share in the stock market for the current quarter (2014-Q4), as measured by the Chicago Board of Exchange's dividend futures contracts, as not much changed for all of the other more distant future quarters for which we have data. Our first chart below shows the amount of quarterly dividends per share that are now expected to be paid out for the S&P 500 before the expiration of each dividend futures contract through the third quarter of 2015, which should be compared to our previous snapshot of these same expectations from two months ago. 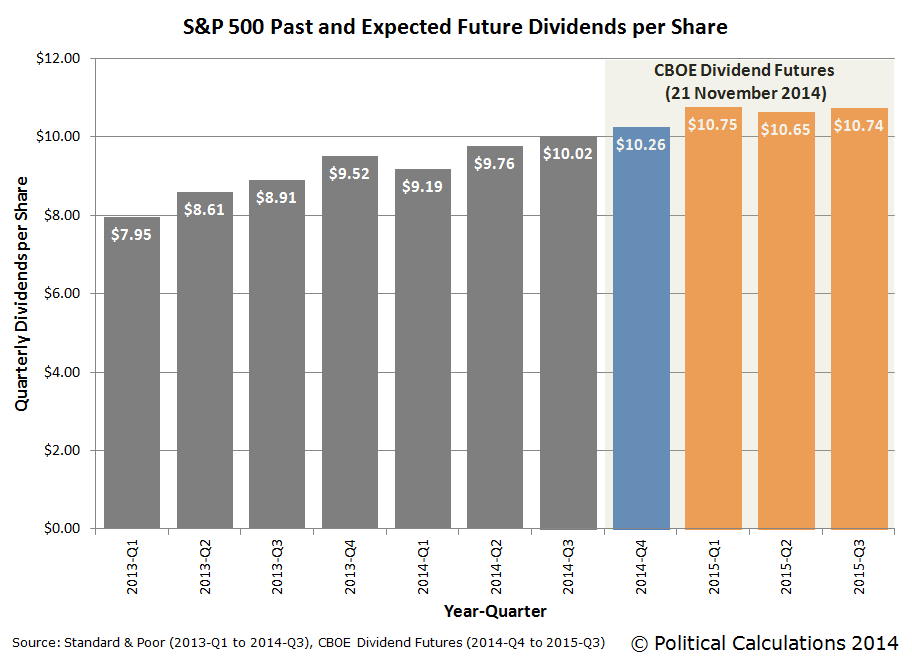 As a quick side note, the term mismatch issue that exists between the data reported by S&P and that indicated by the CBOE's contracts is such that we expect that the value for 2014-Q4 will be adjusted significantly upward at the expense of 2015-Q1 when S&P reports its data for the fourth quarter of 2014 early in 2015.

Using this data to calculate first the year-over-year growth rates of the S&P 500's trailing year dividends per share, and then the change in those growth rates from one quarter to the next, we can see the expectations surge for 2014-Q4, while the other future quarters don't change very much at all. 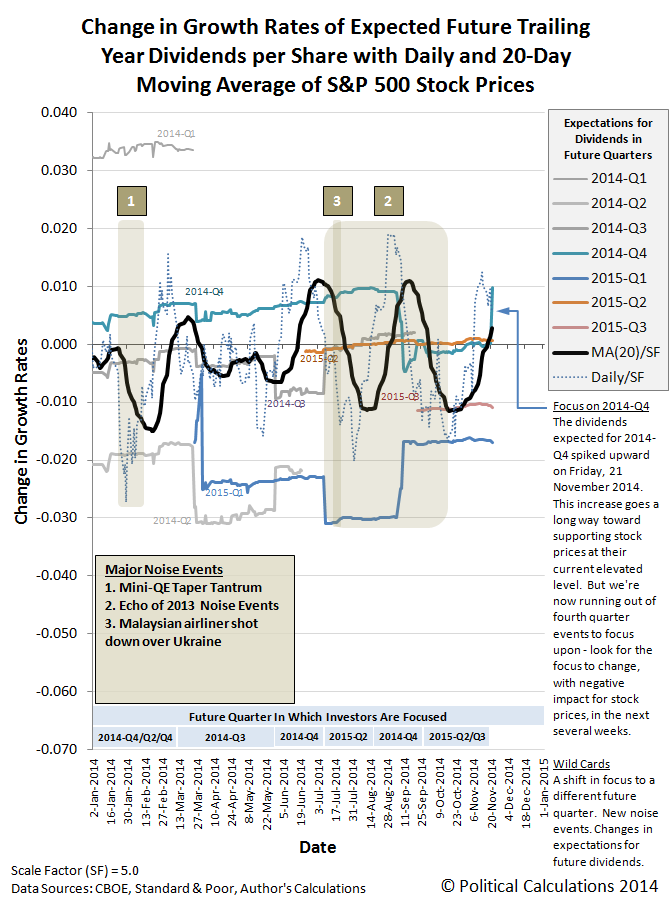 Since investors have been largely focused on 2014-Q4 in setting stock prices since the Fed's October meeting, stock prices rose significantly on Friday 21 November 2014, and very soon after the market opened, they peaked at 2071.37 before finally fading to close at 2063.50, just 10.75 points above its previous closing value. 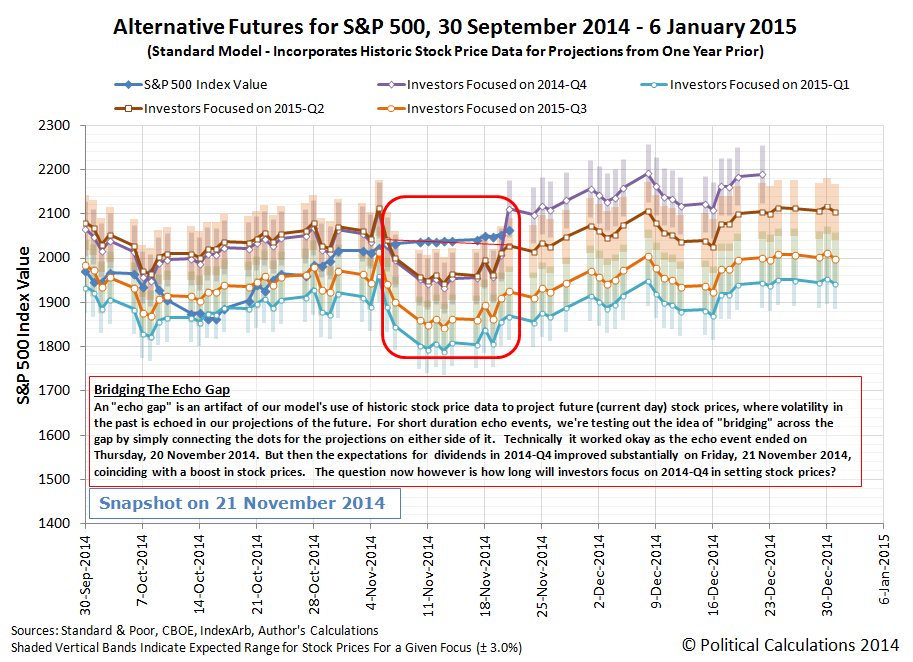 As best as we can tell, the one thing that caused investors to suddenly focus on 2014-Q4 and to adjust their expectations for the amount of dividends that S&P 500 companies would pay out for the quarter was China's central bank's surprise action to cut interest rates to stimulate that nation's slowing economy as it approaches recessionary levels.

Normally, that sort of thing wouldn't amount to much more than what we would describe as a noise event, where the change in stock prices would be relatively short-lived, but this noise event coincided with a change in the fundamental driver of stock prices. That makes it unlike the minor speculative boost in U.S. stock prices following a merger announcement in the biotech industry earlier in the week. And as such, it is a rare example of how noise can actually contribute to the efficiency of setting stock prices, although as we've observed in previous examples, its contribution is most often rationally inefficient.

Now let's throw some chaos into the mix. Right now, investors are very much focused on 2014-Q4 in setting today's stock prices. But the quarter is more than half over, so the key question is how long will that continue? They will soon have to shift their forward-looking focus to some other point of time in the future.

That's where the recent improved expectations for the current quarter can come back to bite. Since the outlook for the other future quarters that investors have to select from did not improve, and because those outlooks are, at present, largely negative, the boost in stock prices today will set up a larger decline in the future when the attention of investors does shift.

And how big that decline will be is something that will itself be determined by the expectations associated with the alternative future points of time that investors might choose to focus upon next.

The best outcome would be if investors focus upon 2015-Q2, which is something they might be prompted to do if the Fed more clearly indicates that it will boost short term interest rates in that quarter.

The intermediate outcome would be if investors have reason to return their focus to 2015-Q3, which is something they might do since that's when the Fed last indicated it was likely to boost those short term interest rates.

And the worst outcome would be if investors suddenly had reason to focus upon 2015-Q1.

We're following our annual tradition of focusing almost entirely on the Thanksgiving holiday all next week, but we'll find a way to tie in stock prices in some way, shape, manner or form before the week is over. And turkeys. Probably together in an incredibly unlikely way!

And now, you can't say you weren't warned!