For all the noise related to falling oil prices and their impact upon stock prices during the past week, there is something that we have not yet seen that would fully confirm the fears of U.S. investors: large numbers of companies in the oil sector acting to cut their dividends.

That is not to say that action will not be eventually be forthcoming, but as yet, we have only seen a very limited number of oil industry related companies take that action since we noticed an uptick in their number in November 2014, so we would describe the current action with stock prices in the market as being primarily the result of speculative noise.

As a noise event then, what matters most in driving stock prices today is the timing of when investors are betting that these companies with increasingly distressed revenue prospects will act to cut their dividends. Here, rather than being solidly focused on a single point of time in the future, stock prices are becoming volatile because investors are shifting their attention between two different points of time in the future, which have different expectations for the growth rate of the dividends that investors can reasonably expect to earn from owning stocks associated with them.

We think that dynamic may explain an unusual pattern that we've previously observed in the months and weeks ahead of major market crashes, where large drops in stock prices that occurred as order broke down in the stock market were preceded by similarly-driven volatility.

With that in mind, our first chart below illustrates the current state of order in the U.S. stock market, as measured by the S&P 500 against its trailing year dividends per share, which has held since 4 August 2011. 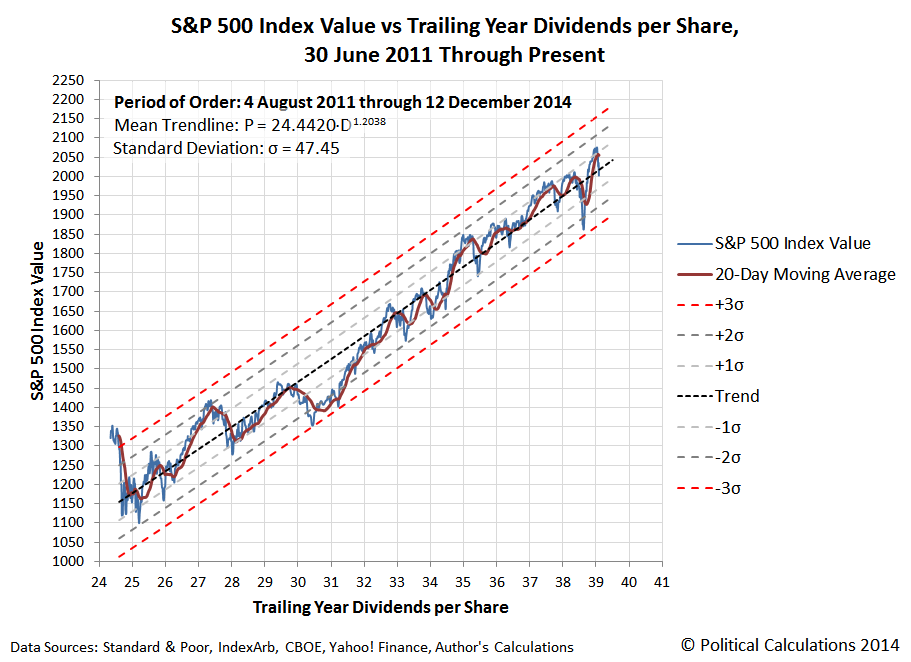 So we're clear, the stock market can be said to be experiencing a period of relative order whenever stock prices are following an established power law trend with respect to their trailing year dividends per share, where the residual variation of stock prices about that trend can be described by a normal (or Gaussian) distribution. Or more accurately, when a statistical hypothesis test cannot reject the possibility that stock prices are behaving "normally".

In looking for signs of significant volatility that might precede the breaking down of an existing state of order in the stock market are changes in the 20-day (one-month) moving average of stock prices that exceed two standard deviations in magnitude.

You'll see several as you review this chart. The first appears when the S&P 500's trailing year dividends were below $25 per share, which occurred in the period from 30 June 2011 to 4 August 2011. This particular drop marks the beginning of the current period of order in the stock market, which coincided with the end of the Federal Reserve's second Quantitative Easing (QE 2.0) monetary stimulus program in June 2011.

After the present state of order became established, the next time that stock prices showed significant downward volatility were when trailing year dividends reached about $27.50 per share in June 2012 and again when they reached just over $30 per share in October 2012.

Under typical circumstances, this episodes of volatility would have signaled that order was breaking down in the U.S. stock market. And it was, as the U.S. economy was on the verge of entering into a new phase of contraction. The only thing that saved the U.S. economy and preserved order in the U.S. stock market was the Federal Reserve's launching of its third quantitative easing program (QE 3.0) in September 2012, which it subsequently expanded in December 2012 (QE 4.0).

So it's not that the signal of order breaking down in the U.S. wasn't sent or didn't work, but rather that it was heeded by the Federal Reserve, which acted to prevent it from breaking down in the stock market while also keeping the U.S. economy out of a full-fledged recession. They were successful in their effort.

The next time we see a two standard deviation shift in the value of U.S. stock prices occurred shortly after trailing year dividends per share neared $38.50 per share in mid-September 2014, shortly after the Fed confirmed that it would terminate its QE 3.0/4.0 programs at the end of 2014.

That brings us up to now, where we find that instead of being fully focused on 2015-Q2, as they seemed to be just a week ago, investors would also now appear to be paying increasingly close attention to 2015-Q1 in setting today's stock prices. Our chart showing the expectations that investors have for the future, as measured by the change in the growth rate of trailing year dividends per share for each of the future quarters for which we have data, places stock prices in between these two particular future quarters. 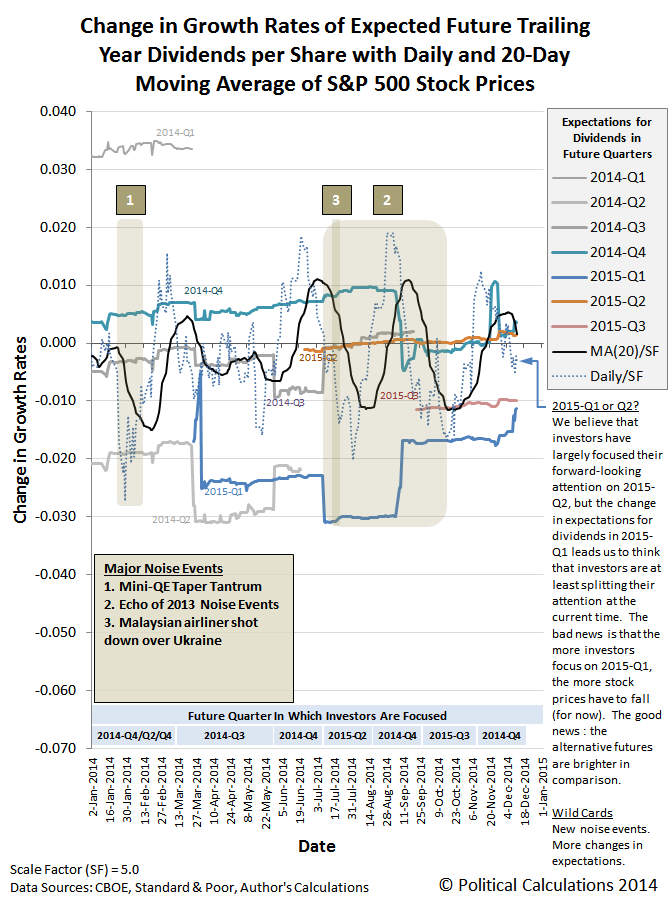 In this chart, we observe that 2015-Q1 has recently drawn the attention of investors, which is significant because this is the quarter in which that those increasingly revenue-distressed oil companies would most likely act to cut their dividends. That action would be really similar to the dynamic that took hold in the stock market after the U.S. economy peaked in December 2007 ahead of the so-called Great Recession, which then set up falling dividends as the primary driver of stock prices throughout 2008.

Meanwhile, we believe that investors remain mostly focused on 2015-Q2, since that coincides with the period of time in which the Fed is most likely to begin hiking short term interest rates in the U.S.

It is the interplay between these two factors set to occur at two different points of time in the future that is what will make for the potential for a really rocky ride for investors.