In discussing the rise of volatility in the U.S. stock market at this time yesterday, we omitted our chart showing each of the trajectories that stock prices are likely to follow depending upon which particular quarter in the future they might be focusing their attention. If you haven't read that post yet, that is the explanation for why stock prices ran the gamut from one extreme to the other yesterday. 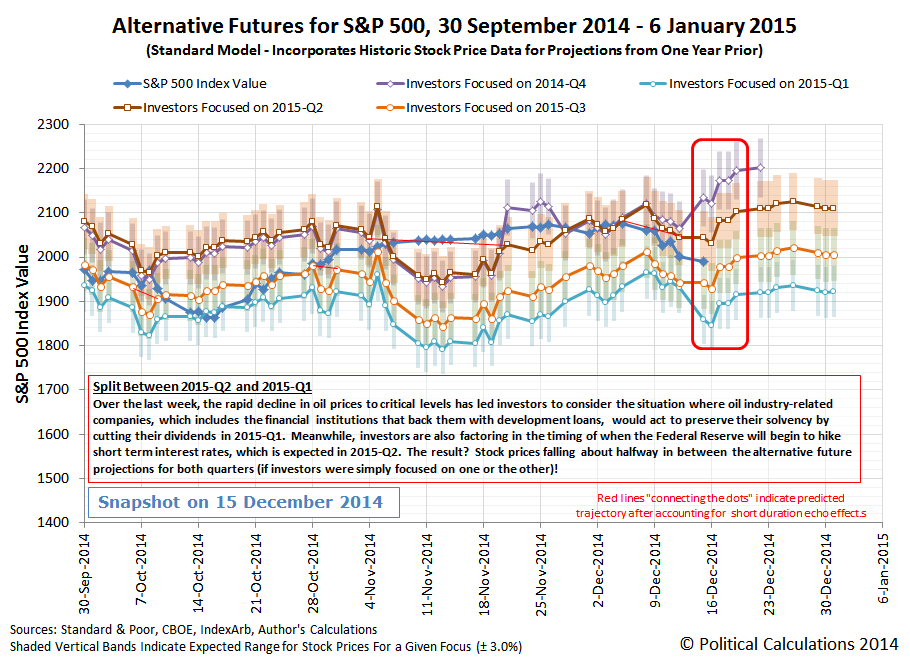 Here's the text from the chart:

Over the last week, the rapid decline in oil prices to critical levels has led investors to consider the situation where oil industry-related companies, which includes the financial institutions that back them with development loans, would act to preserve their solvency by cutting their dividends in 2015-Q1. Meanwhile, investors are also factoring in the timing of when the Federal Reserve will begin to hike short term interest rates, which is expected in 2015-Q2. The result? Stock prices falling about halfway in between the alternative future projections for both quarters (if investors were simply focused on one or the other)!

Update 9:10 AM EST: The CBOE's dividend futures for 2014-Q4 (which extend through the end of this week) showed a boost yesterday as the dividend futures for 2015-Q1 showed a nearly equal decrease. What that most likely means is that investors have made the determination that dividends they had expected to be paid after this upcoming Friday will instead be paid out on or before that date - there really hasn't been a major change in the future expectations as of the market open on 15 December 2014! What that does change however is the relative position of stock prices between the alternative trajectories associated with the future quarters of 2015-Q2 and 2015-Q1, with investors appearing to be more heavily weighting their collective focus on 2015-Q2 in setting today's stock prices.

Update 10:30 AM EST: It does occur to us that there may be another possibility - with the apparent distress in the revenues of oil companies, investors could be weighing the possibility that the Fed might delay its hiking of interest rates into 2015-Q3. If so, we might get a confirmation of that on Wednesday, 17 December 2014 when the Federal Reserve's Open Market Committee issues a statement and Janet Yellen holds a press conference.

As a reminder, our regular analysis of the U.S. stock market will only continue through 23 December 2014. Since we've finished our development work in that area, we're moving on to other projects.