Today, President Barack Obama is expected to talk about the state of the nation's housing market recovery at a speech in metropolitan Phoenix, Arizona, one of the hardest hit regions for the real estate industry in the whole country. We thought we'd show you what that recovery really looks like in advance of the President's speech.

Our first chart shows the number of new houses being built in the United States in each month from January 1959 through October 2014: 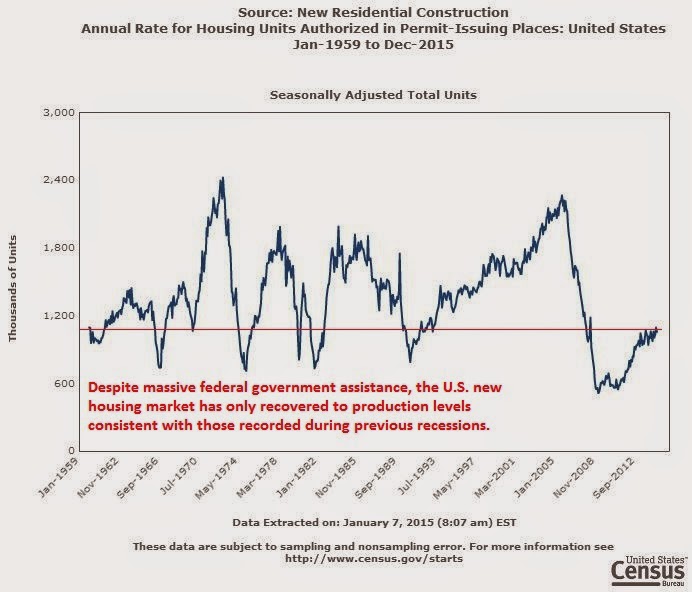 In this chart, we see that years after the first U.S. housing bubble peaked in 2006, the new housing market in the U.S. has finally recovered to a level that is consistent with the volume of production that occurred during previous major recessions.

Meanwhile, the median sales price of new housing has skyrocketed since the first housing bubbble bottomed and stabilized, with the typical home now being sold in the U.S. now far out of the affordable reach of the typical American household: 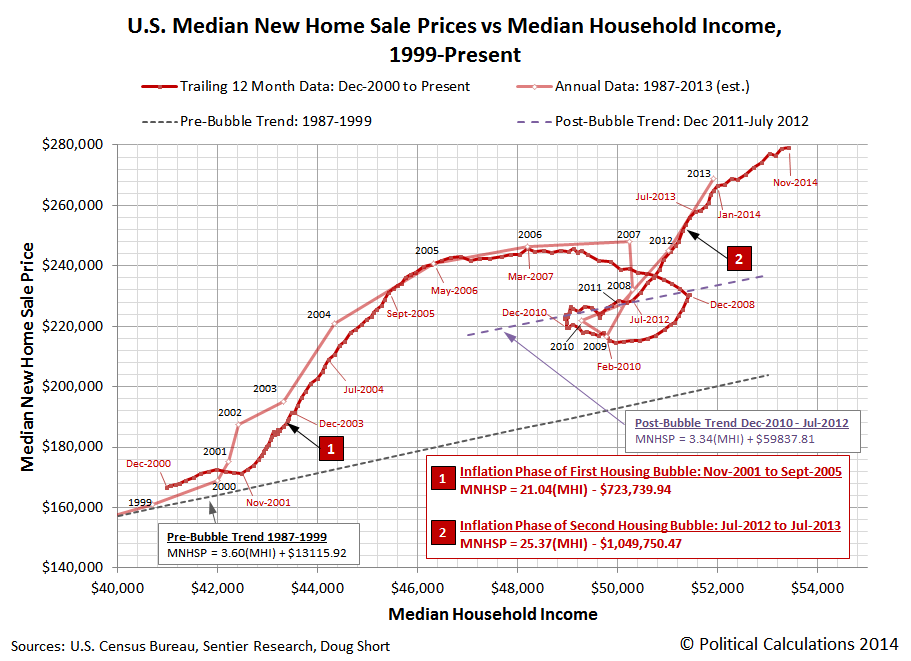 This was largely due to the onset of what we've described as the second U.S. housing bubble, where major investment firms bought up mass quantities of distressed properties, creating an artificial shortage that has continued into the present day. The primary inflation phase of that investor-driven activity took place between July 2012 and July 2013.

Since then, the rate of growth of median sale prices for new homes has slowed, but is still well above historic rates of growth consistent with a health new home market. Since January 2014, the median sale price of a new home in the U.S. has been rising at $9.77 for each $1 that median household income has increased, which is anywhere from 2-3 times the typical pace that was seen in the period from 1967 through 1999, or in the initial post-housing bubble crash recovery period from January 2011 through June 2012.

Our next chart below shows the longer term picture for the escalation of median new home sale prices in the U.S. since 1967.

One of the big reasons that new home prices have escalated during the second U.S. housing bubble is because U.S. home builders deliberately neglected producing affordable homes as investment firms bought up low priced homes in the existing real estate market, focusing instead on building larger percentages of premium homes that they attempt to sell for premium prices. 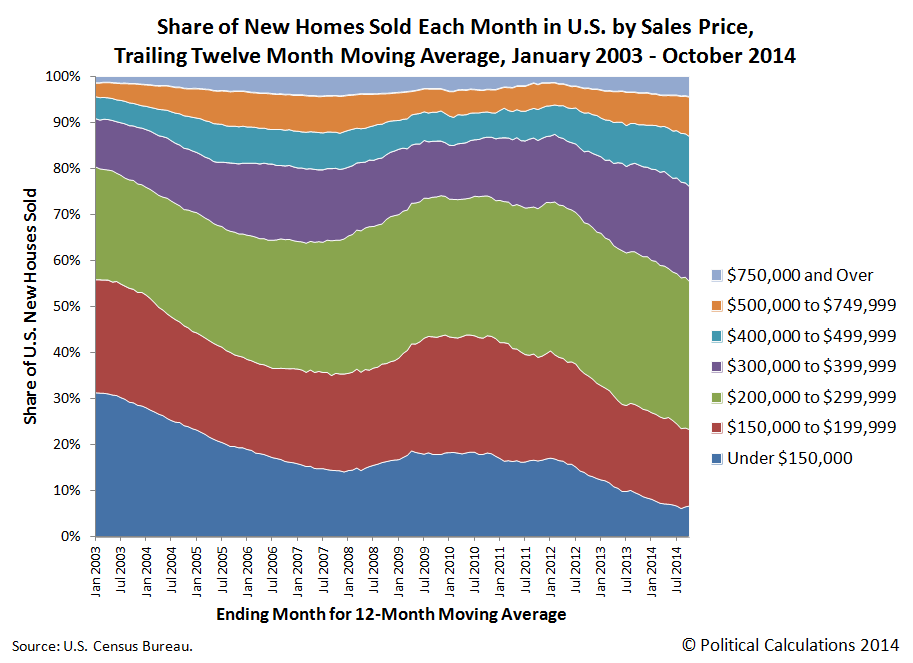 As with the first U.S. housing bubble, we see that the sales mix of the current housing market has once again become considerably skewed toward the high end of the market. We see that new homes priced $300,000 or more now claim about 40% of all sales, up roughly 10% from the level recorded in July 2013.

That's quite a dramatic change in such a short period of time. In fact, this kind of change in the sales mix of new homes should be considered to be a characteristic of a bubble in the new home market. Speaking of which, we should also note that what determines if a housing bubble exists is the rate at which prices change with respect to household income - comparisons of the current price level or quantity of homes built with those recorded during previous peaks or troughs do not matter in that determination.

That's why the proposals to cut the cost of mortgage insurance in half and to relax mortgage lending standards to allow lower down payments that President Obama is expected to make in his speech in Arizona today are particularly out of touch - doing absolutely nothing to fix the problem of housing prices that are increasingly rising out of the affordable reach of the typical American household. Worse, they could potentially trick people who really can't afford the kinds of homes currently being sold in the U.S. to sign mortgages for homes they cannot afford, which proved to be a real problem, if not a big mistake, during the deflation phase of the first U.S. housing bubble.

Of course, this is the same President who gave a speech yesterday trumpeting the recovery of the U.S. automobile industry at an automobile production plant that has been shut down for the past week because of poor consumer demand for the kind of fuel efficient automobiles produced at it, so expecting the President to be in touch with economic reality might be expecting far too much.

It would seem then that the perspective of the U.S. economy that a President gets from spending so much time on the nation's golf courses probably isn't sufficient to keep in very good touch with the nation's economic realities. But at least he has something positive to show for all his time on the links, as media reports indicate his golf game is improving.

Sentier Research. Household Income Trends: July 2014. [PDF Document]. Accessed 23 December 2014. [Note: We have converted all the older inflation-adjusted values presented in this source to be in terms of their original, nominal values (a.k.a. "current U.S. dollars") for use in our charts, which means that we have a true apples-to-apples basis for pairing this data with the median new home sale price data reported by the U.S. Census Bureau.]