There's a long established school of conventional thought that says when uncertainty among investors in the stock market increases, stock prices will fall, and conversely, when their level of uncertainty decreases, stock prices will rise. Whether that's in response to a change in a government policy or a change in a central banking policy,
the thinking is that uncertainty creates fear among investors, who react by sending stock prices lower as they seek to lock in any paper profits they've accumulated over when they originally purchased the shares of stock they sell and increase their cash equivalent holdings.

As we're about to show you, absolutely not!

Let's first step back in time, to Monday, 2 March 2015. On that day, Reuters reported that a near-Fed majority would back a June liftoff for raising short term interest rates, even though Fed Chair Janet Yellen had yet to commit to the plan.

So we find that the certainty level for investors of that event occurring was already high. And as you might expect, since stock prices reflect expectations of future dividends, investors were setting stock prices in accordance with the expectations of future dividends associated with those that will be paid in 2015-Q2, where June 2015 marks the final month. 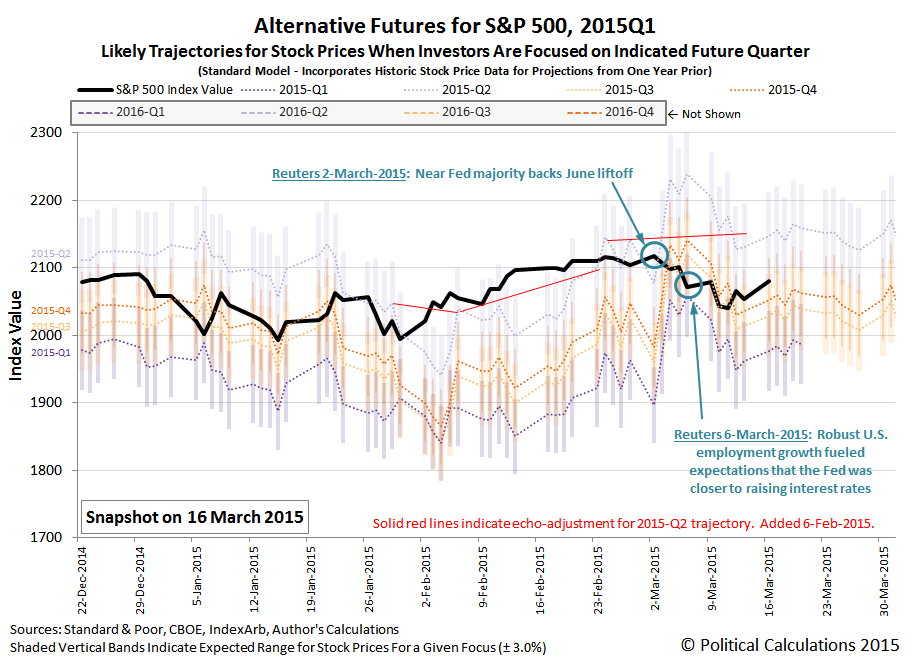 But later that week, things changed to where investors became all but absolutely certain that the Fed would indeed act to hike U.S. short term interest rates by the end of 2015-Q2, which was the result of a very robust employment situation report for February 2015. The result of which was that stock prices opened lower and fell throughout the day.

So why didn't they rise instead as conventional thinking would demand?

The answer to that question is that once the probability of an event occurring becomes assured, investors will rationally turn their attention to the areas where they do have uncertainty and reset their future expectations accordingly. As you can see in our chart above, they would appear to have turned their attention forward to the more distant future represented by the expectations associated with the amount of dividends that will be paid out to shareholders in 2015-Q4.

And so we see that as the possibility of a Fed rate hike in June 2015 went from what had previously been an event with a high probability of occurring to an all-but-certainty, instead of locking in to the higher level of expectations of future dividends at that point of time, that near absolute certainty actually freed investors to look forward to a different period of time beyond where they had previously focused. In this case, since those expectations were not as positive as those associated with 2015-Q2, stock prices fell.

And through today, 16 March 2015, they remain consistent with investors being focused on 2015-Q4 in setting today's stock prices.

Or as we like to say, the way stock prices behave is chaotic and complex, where the only real randomness in the market was tied to the timing of new information and the investors' selection of a different future quarter to focus upon. And even without knowing those two things in advance, where stock prices finalized was still largely predictable within a few percentage points of what we subtly forecast weeks upon weeks ago for how it all played out.