Political Calculations
Unexpectedly Intriguing!
05 May 2015
Oil Prices and Layoffs in the Oil Patch

How much of a correlation is there between falling oil prices and the number of layoffs, as measured by seasonally adjusted new jobless claims, in the eight states whose oil industries employ high cost production methods for extracting crude oil?

So we did the analysis using the data weekly data from 4 January 2014 through the most recent data available for these states (18 April 2015). Our results are charted below, where we've also sketched in a polynomial regression curve for reference: 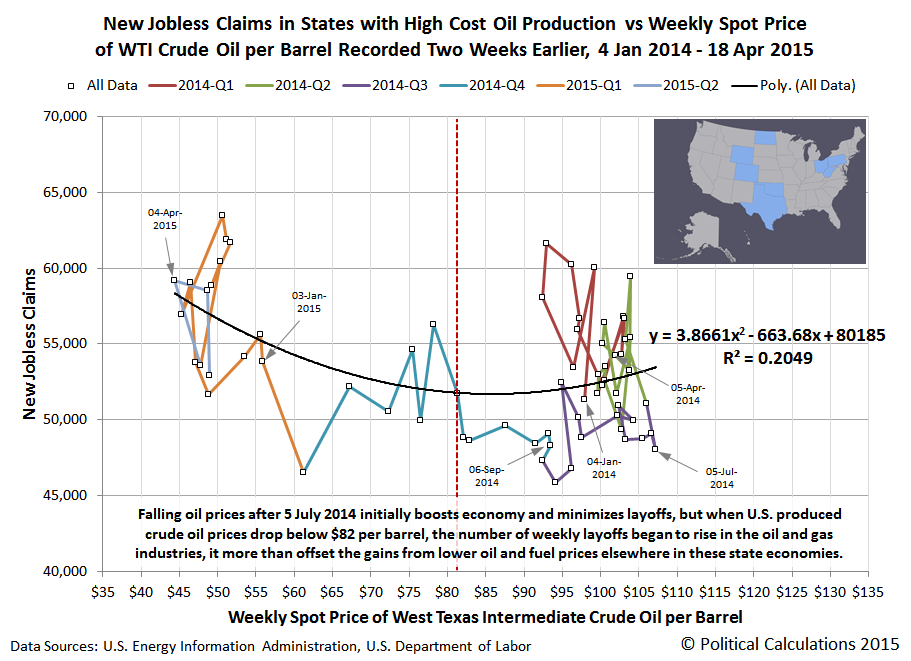 Starting with 4 January 2014, we see the effect of the economic contraction that was recorded nationally in that first quarter of 2014. We see the number of new jobless claims generally fall as crude oil prices increased in the second quarter of 2014, as the oil industries in these states benefited from those higher oil prices.

But then, we see that the number of new jobless claims was minimized as oil prices began to fall rapidly in the third quarter of 2014 and into the fourth quarter, but only until the spot price for West Texas Intermediate Crude Oil dropped below $82 per barrel. The period where new jobless claims were recorded at their minimum level in these eight states coincides with the time of when the benefits of falling oil prices were being realized across the nation, while at the same time, the oil and gas extraction industries in these states continued business as usual, waiting to see where the bottom might be before acting to cut back on their operations.

That dynamic explains why GDP nationally was recorded to be so strong in 2014-Q3.

That changed in mid-November 2014, when the price of crude oil produced in the U.S. dropped below $82 per barrel and continued to fall. After that point in time, the oil and gas production firms in these eight states began sharply curtailing their operations, causing the number of weekly new jobless claims to begin to rise. As the math would have it, that's a bit shy of 25% below the maximum price of $107.23 per barrel recorded on 5 July 2014.

Since then, the number of new jobless claims being filed each week in these eight states has generally risen as oil prices have fallen. Until late in the first quarter of 2015 and in April 2015, when the falling trend for crude oil prices in the U.S. began to reverse, leading new jobless claims to also reverse in these states.

Since oil prices have continued to rise in three weeks since 18 April 2015, it is likely that the number of layoffs in these states will fall as the state of their oil industries stabilize. This is a major reason why we see the economy as performing better so far in 2015-Q2 than it did in 2015-Q1.

The downside of course is that rising oil prices means that economic growth resulting from falling oil prices in the rest of the nation is set to slow, which is why we still expect positive, but sluggish-to-slow growth in 2015-Q2.

U.S. Energy Information Administration. Cushing, OK WTI Spot Price FOB. [Online Database]. Accessed 3 May 2015. In our analysis above, we matched the number of new jobless claims in a given week with crude oil prices from this source from two weeks earlier, which accounts for the typical pay cycle-driven lag between when a firm's decision to lay off employees is made and when it shows up in the new jobless claims data.