We had planned to retire our chart tracking the change in the number of employeed by age group since November 2007, when the total employment level in the U.S. peaked ahead of the beginning of the so-called "Great Recession", but data in the April 2015 Employment Situation report is giving us cause to resuscitate it.

Only this time, we're also going to identify periods where oil and fuel prices in the U.S. were either rising, falling or holding stable as a backdrop against which the changes in employment for U.S. teens (Age 16-19), young adults (Age 20-24) and adults (Age 25 and older) have been taking place. 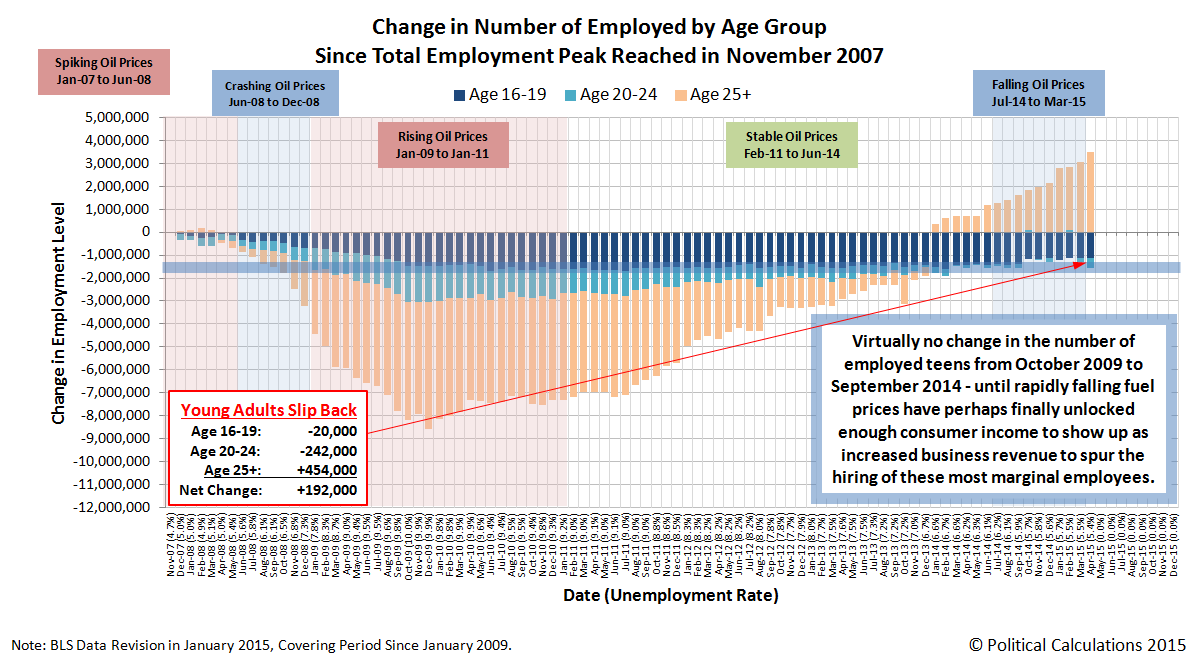 Looking at the changes in the employment levels of U.S. young adults, we see that in general terms, employment in this age group would appear correlated with the trend for oil and fuel prices in the U.S., where when these prices are stable or falling, the number of working young adults tends to grow, and when these prices are rising, the number of employed 20-24 year olds tends to fall.

That pattern matters today in that falling oil and gas prices in the U.S. began to slow and reverse in February and March 2015, and since the beginning of April 2015, have begun to rise. At the same time, we observe that the number of young adults employed in the U.S. civilian labor force has begun to decline, falling back below the level that was recorded back in November 2007.

Or rather, it would appear that the Great Recession is not quite over for young adults in the U.S.

That combination would not be a good one for the employment situation for young adults. Here, Americans Age 20 to 24 make up nearly a quarter of all individuals who earn the minimum wage or less in the U.S. At the same time, many of the businesses that employ workers at the minimum wage tend to be in industries such as food and accommodation, which are very sensitive to changes in oil and food prices and the effects they have on the disposable income of Americans.

These kinds of businesses are negatively affected when rising oil and fuel prices reduce the amount of money that American consumers have available for other kinds of consumption, such as dining out at fast food restaurants and similar establishments, while the reverse situation applies when oil and fuel prices are falling, the latter of which is really the story of the economic recovery from July 2014 through March 2015.

It would seem then that in the seven years since the Great Recession began, U.S. policy makers have clearly not learned the lessons they need to avoid this negative outcome for young adults.