Political Calculations
Unexpectedly Intriguing!
30 June 2015
Closing out the Second Quarter of 2015 with the S&P 500

Reuters has sounded some dire news:

U.S. stocks fell sharply in heavy trading on Monday and the S&P 500 and the Dow had their worst day since October after a collapse in Greek bailout talks intensified fears that the country could be the first to exit the euro zone.

The European Central Bank froze funding to Greek banks, forcing Athens to shut banks for a week to keep them from collapsing.

And Greece appeared to confirm it was heading for a default after a government official said the country would not pay a 1.6 billon euro loan installment due to the International Monetary Fund on Tuesday.

U.S. investors also worried about Puerto Rico's debt problems and a bear market in China the day before quarter-end and ahead of Thursday's U.S. jobs report and the long weekend for U.S. Independence Day.

So are U.S. investors really "fleeing" the U.S. stock market based on the situation in Greece, Puerto Rico and China? 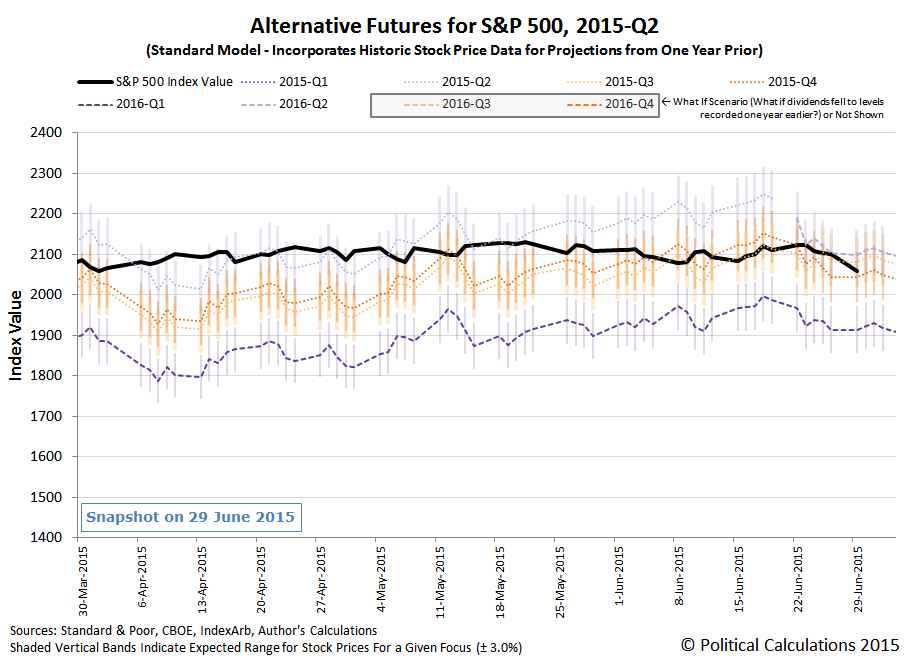 That's really a consequence of how tightly compressed the expectations for the change in the year-over-year growth of dividends per share in each of these future quarters is at this time - there's really not that much difference between them at this point (although watch out below if investors suddenly focus on 2016-Q1!).

But more practically, if we had to pick one future quarter where the expectations associated with are currently driving the trajectory of the S&P 500, we'd go with 2015-Q3, for reasons not having anything to do with Greece, Puerto Rico or China, so the answer to that first question is... not so much.

Which will be nice while and as long as that lasts, but perhaps a better and more relevant question to ask at this point is how close is order to breaking down in the U.S. stock market? 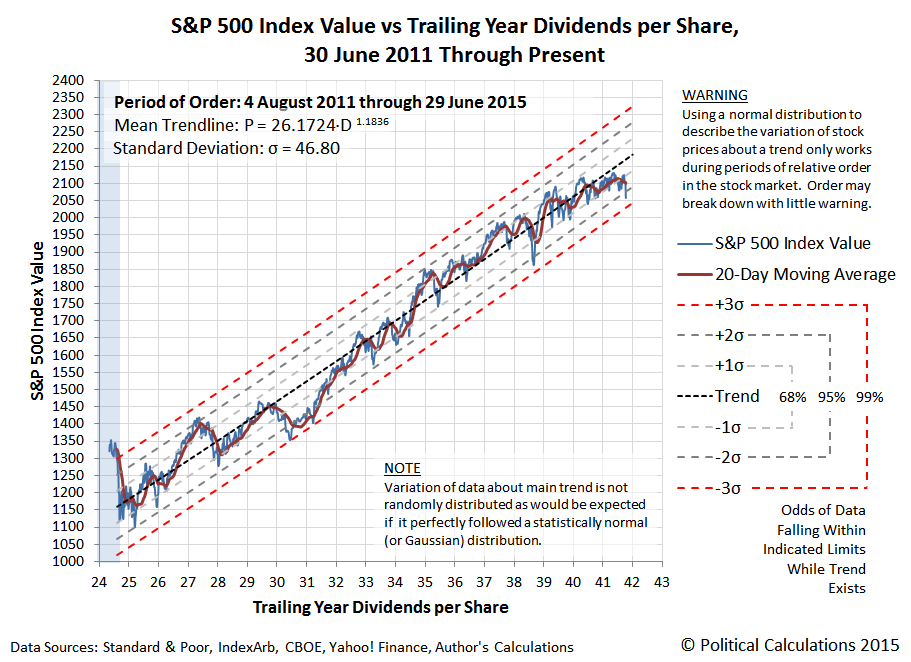 More interesting is that its happening at nearly the four year anniversary of the last time order broke down in the U.S. stock market, after 30 June 2011, when the Federal Reserve's QE 2.0 bubble suddenly deflated. 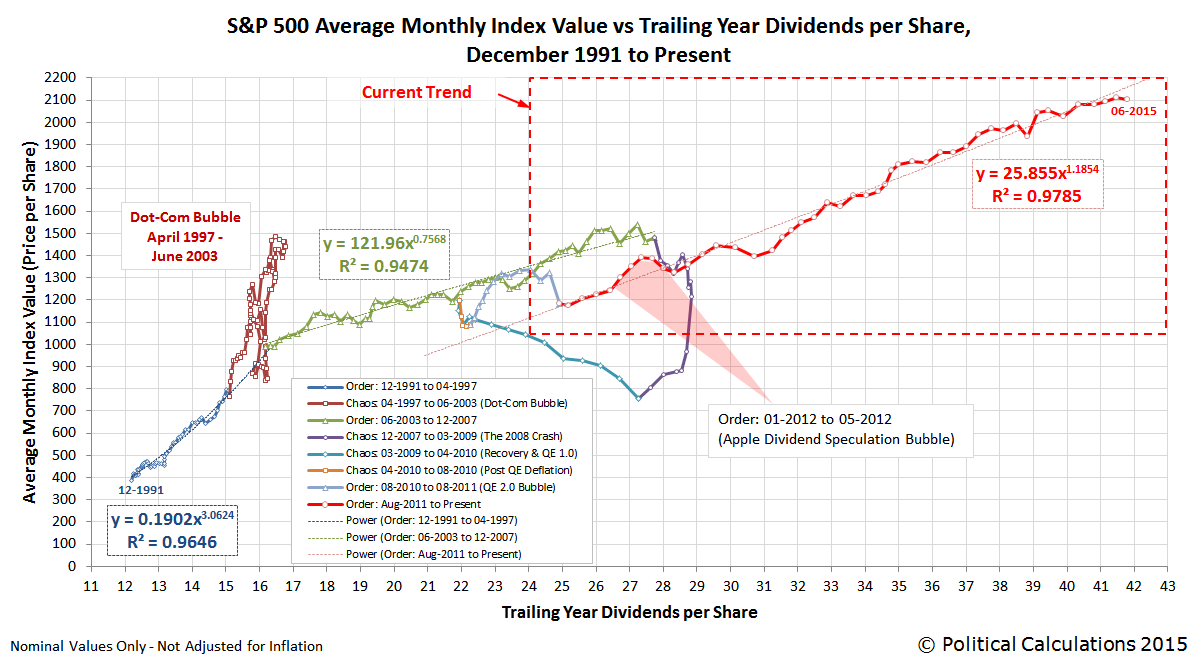 So will the period of order that began on 4 August 2011 finally break down after holding for four years? Well, if we consider each of the alternative trajectories for which we have sufficient data to project into the future using our standard forecasting model is any indication, the answer is... almost certainly yes. 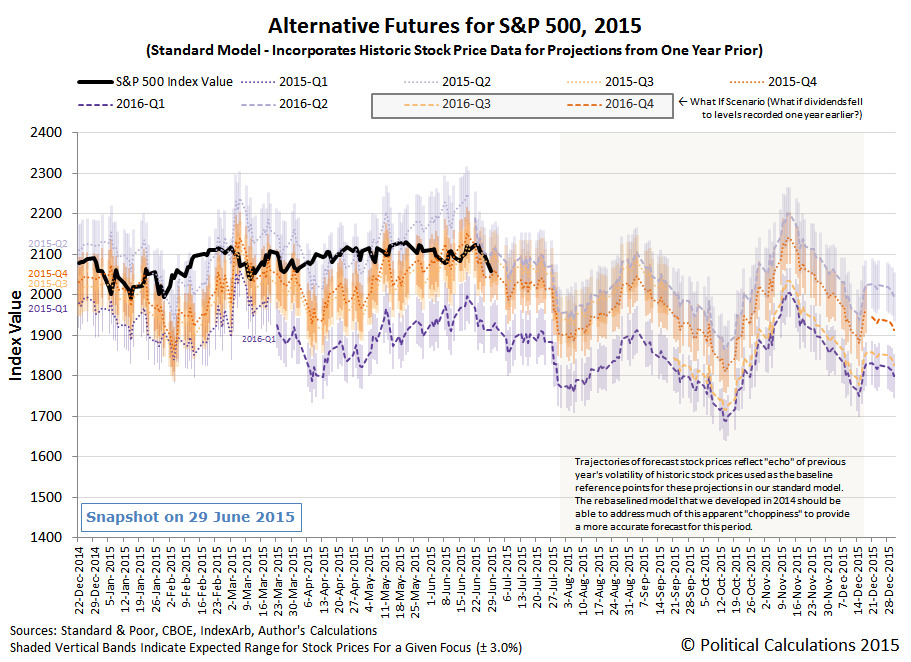 We've got about a month where we can continue to use our standard forecasting model for the S&P 500 in 2015, before we'll need to switch to our rebaselined model to work around the effects of the echoes resulting from last year's stock price volatility upon our standard model.

But this will likely be the last time we share what the alternative futures for the S&P 500 look like this year, as we'll have other things going on that will demand our attention.