After playing a massive amount of catch up last month, workers at the U.S.' west coast ports would appear to have largely eliminated the backlog of Chinese goods sitting that had been floating in container ships off the U.S. coast in April 2015.

We know that's the case, because after the surge of imports that flooded into U.S. ports in March 2015, following the settlement of a labor dispute at the U.S.' west coast ports, the year-over-year growth rate of goods being exported from China to the U.S. dropped unexpectedly into negative territory. 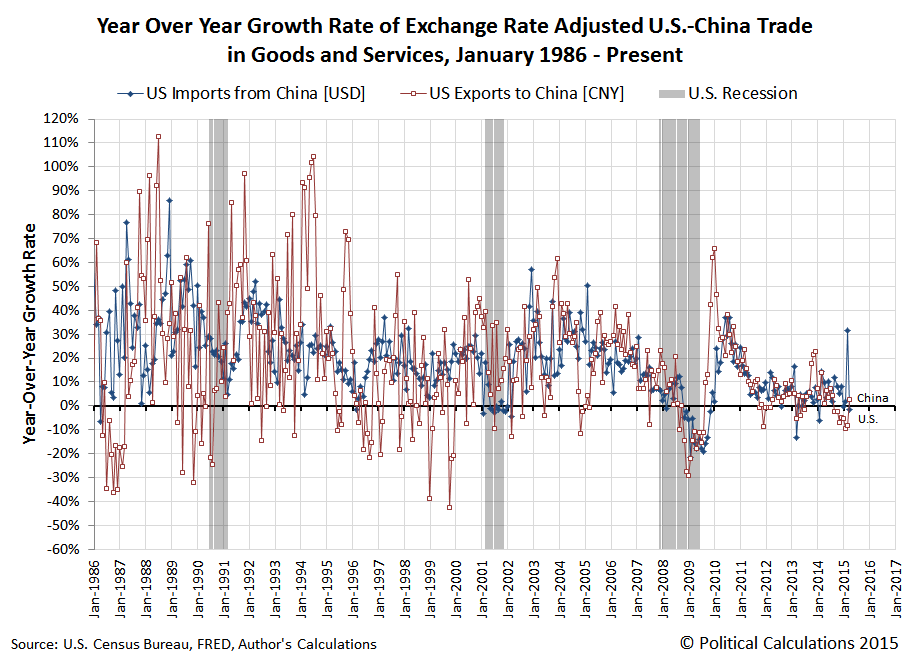 Under normal circumstances, we would consider that to be a recessionary indication for the U.S. economy, but given the sheer volume of Chinese goods that passed through the nation's ports in March 2015, we suspect it has more to do with the backlog of goods that had built up off the U.S. west coast in the months from December 2014 through late-February 2015, where Chinese firms reduced their production and the corresponding amount of goods they were shipping to compensate.

Meanwhile, April 2015 saw the year-over-year exchange rate adjusted growth rate of U.S. goods being exported from the U.S. to China increase back into positive territory for the first time since September 2014.

As we had believed that the flow of goods from the U.S. to China was hardly affected by the U.S. west coast labor dispute, that outcome would represent a significant improvement in the state of China's economy, since it would suggest that the Chinese government's efforts to stimulate that nation's economy might finally be gaining some traction.

The news from China however suggests that's more of an anomaly. China just reported that its imports in May 2015 were much less than had been expected. And while Chinese trade statistics are not considered to be an accurate measure, they do provide an indication of the direction of the nation's economy.

A reasonable explanation then for that anomalous positive reading then would be the settlement of U.S. west coast port labor dispute. Here, after unloading all the Chinese goods whose delivery had been held up by the labor dispute, U.S. dock workers then reloaded the container ships with whatever goods had backed up in U.S. warehouses awaiting export to China.

With a typical trans-Pacific transit time of 3 weeks, most of that backlog would have reached China's ports in April 2015, which could explain why we would see such an anomalous reading in an otherwise negative outlook for the state of China's economy.

Also in May 2015, China's government moved to ramp up its efforts to stimulate the Chinese economy, as it recently slashed its import tariffs in a move aimed to boost Chinese consumption of imported goods and has also announced a massive acceleration of government spending.

Those are actions that would not be necessary if the Chinese government's previous actions were gaining traction. We would therefore infer that China's economy remains in recession.