Last week, when we unveiled our charts showing the historic price of the No. 1 can of Campbell's Condensed Tomato Soup for almost every month since January 1898 to the present, we couldn't help but notice that its price trajectory seemed to be pretty similar to that of the price of gold in the U.S. So, just for fun, we plotted the price of each on the same chart, in logarithmic scale: So not quite parallel, but remarkably similar. That got us thinking - there are a lot of people who would really like to see the U.S. go back onto the gold standard, where the value of a U.S. dollar was set to be equal to a specified amount of gold, with the idea that would keep prices stable over time. But what if that's the wrong standard to use?

How do we know, for instance, that there isn't some sort of gold bubble that has inflated in the years since the U.S. went off the gold standard in 1971?

It occurs to us that's something that would become immediately apparent if we used a different standard to set the relative value of the U.S. dollar. Something like, say, a can of Campbell's Condensed Tomato Soup....

So we calculated the number of No. 1 cans of Campbell's Condensed Tomato Soup that it would be equivalent in value in U.S. dollars to the price of an ounce of gold. Our results are illustrated below: 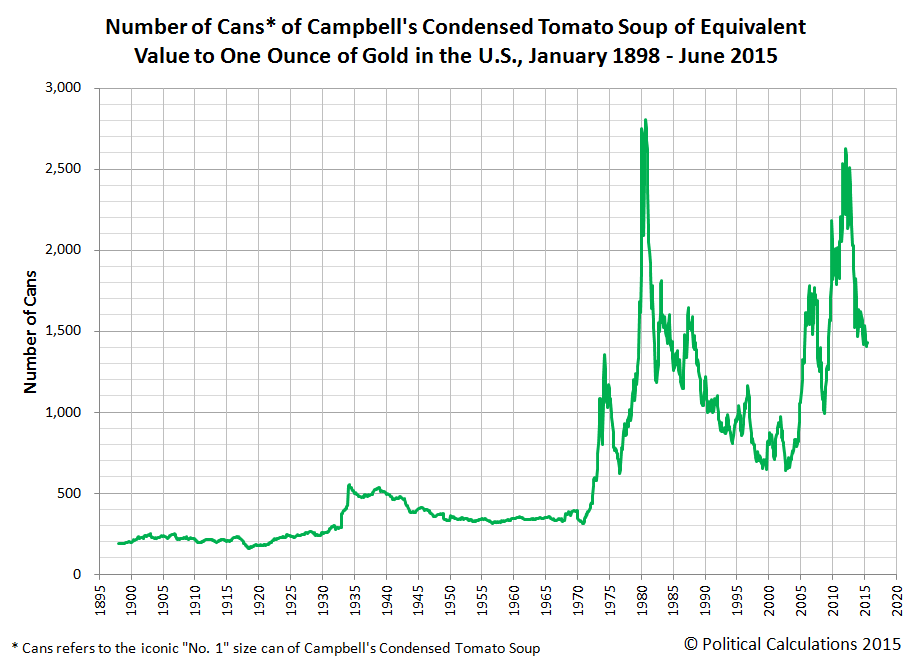 We'll go over the history in greater detail at a future point of time, but what's immediately clear is that when the U.S. strictly followed the gold standard, the equivalent value of cans of Campbell's tomato soup was pretty stable. In the years from 1898 to 1933, we see that an ounce of gold would pretty consistently buy a little over 200 cans of tomato soup. After the U.S. devalued the U.S. dollar with respect to gold in 1933, we see that ratio jump up to 500 cans of tomato soup per ounce of gold until 1943, when it finally dropped below 400 cans per ounce of gold.

Beginning in 2005, we see a new major bubble form in gold as it spiked upward once again to 2,600 in 2012, before falling back to where it is today, with a value of roughly 1,400 Number 1 cans of Campbell's Condensed Tomato Soup per ounce of gold.

As for whether gold or Campbell's Tomato Soup would be a better standard by which to index the value of a U.S. dollar, just answer the following question: After the zombie apocalypse, which do you suppose would make a better and more useful currency?