Going by the closing value of the S&P 500 on each trading day of the week ending 11 September 2015, nothing much unexpected happened during the week. Assuming, of course, that investors remain closely focused on the current quarter of 2015-Q3 in setting today's stock prices. 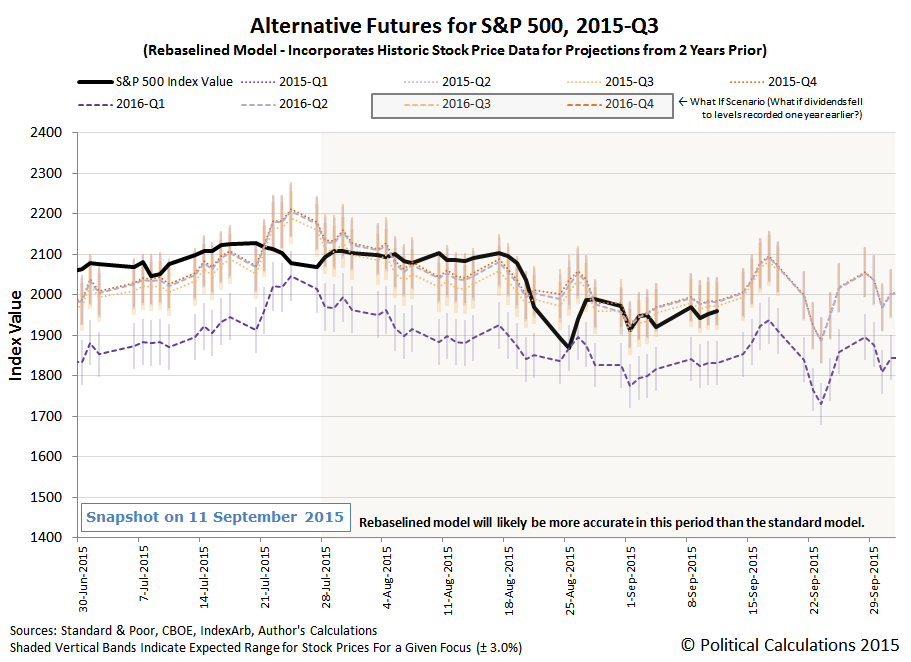 Now, here's where things start to get interesting. The Federal Reserve's Federal Open Market Committee (FOMC) meets on the 16th and 17th of this upcoming week, where on 17 September 2015, the Fed will confirm, for once and for all, whether it will begin almost immediately hiking short term interest rates in the U.S. or whether it will delay its long expected action.

The Fed's pending decision is the reason why investors have been so strongly focused on 2015-Q3, where the expectations associated with the quarter have been largely driving U.S. stock prices, with little exception, for the last several months. We base that assessment on how closely actual daily closing stock prices have tracked along with the alternative future trajectory our model has been projecting for 2015-Q3, particularly on days coinciding with Federal Reserve announcements.

Speaking of which, after the FOMC concludes its two-day meeting on Thursday, 17 September 2015, there will be absolutely no reason for forward-looking investors to continue focusing any portion of their attention on the current quarter of 2015-Q3 for much more than one more day. With the dividend futures contract for 2015-Q3 set to expire on the third Friday of the month, 18 September 2015, investors will soon be compelled to shift their forward-looking attention to another point of time in the future, no matter what.

If the Fed wants to do a good job in managing future expectations, it will direct investors to focus upon either 2015-Q4 or 2016-Q2, thereby avoiding another Lévy flight-driven episode for stock prices and thus offering a much greater degree of relative stability for U.S. stock prices than the potential alternative scenario of investors suddenly focusing their attention again on 2016-Q1. According to our model of how stock prices work, if that were to happen, stock prices would rapidly decline on the order of seven percent below the other most likely trajectories they would otherwise follow, plus or minus three percent (if we account for the typical level of day-to-day volatility in stock prices, and in the absence of other news that might affect investors expectations of the future).

Considering what lies ahead for stock prices even if the Fed is successful in directing the focus of investors to 2015-Q4 or, as we've recommended, 2016-Q2, which would have greater practical utility than we had originally recognized, we would strongly encourage the voting members of the FOMC to follow our advice. We don't believe that it is either desirable or necessary to wipe out an additional $1.3 trillion of market capitalization from the S&P 500, even if done temporarily.

This is one of the very rare occasions where we can predict with absolute certainty when a shift in the forward looking focus of investors will occur. Which future quarter they will settle their forward-looking attention upon, and thus, the level of today's stock prices, can still be influenced.

And unlike in 2008, the FOMC won't be able to say that they didn't understand in advance what the consequences of their forward guidance might be.